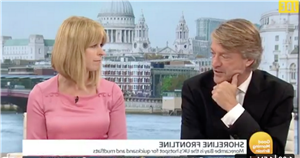 Richard Madeley has said he is ready to step into Piers Morgan's old role at Good Morning Britain and thinks that the show "suits" him.

The former This Morning host has been a stand-in presenter for Piers in the past, but now that the seat alongside Susanna Reid is permanently available, he says he thinks he could be the perfect fit.

Although the 65-year-old has been named as the bookies' favourite to take over the job, he says he hasn't been asked yet – but is open to offers.

Richard told The Sun: "Good Morning Britain, it’s a good show to do. It suits me and, yeah, I think I suit it."

But he added: "I have had no approach at any level formally or informally. The phone hasn’t rung, I haven’t had a ping into my inbox.

“I’ll go in, I’ll fill in, I’ll enjoy it and I hope they ask me back. But in terms of sitting in for Piers, it’s a completely open question.”

Talking about Piers being a big loss to the show, he said: "He’s a big beast to suddenly disappear from that jungle and they’ll want to be sure the permanent replacement will work."

Richard, who spent 13 years co-hosting This Morning with his wife Judy Finnigan and eight years presenting chat show Richard & Judy, said that he didn't "have a career plan" and only wanted to choose jobs that looked like fun.

He said that he didn't feel he had "anything else to prove" after a successful career with Judy and added that if he was younger, the potential to take Piers' old job would mean more to him.

Recent jobs that Richard has taken on include a star appearance in reality show The Circle, and hosting Loose Women spin-off episode Loose Men last week.

In one of his Good Morning Britain appearances filling in for Piers, Richard had viewers laughing at a fake tan mishap.

He explained that he had put moisturiser on his face while sitting in the dark at home waiting to leave for the early morning show, but hadn't realised that he had actually picked up a bottle of fake tan which developed his face to a deep shade of orange as the live programme went on. Piers left Good Morning Britain in March after a row over his comments about Meghan Markle and her tell-all interview with Oprah Winfrey.

So far, Adil Ray and Ben Shepherd have been filling in for him until a replacement is found.