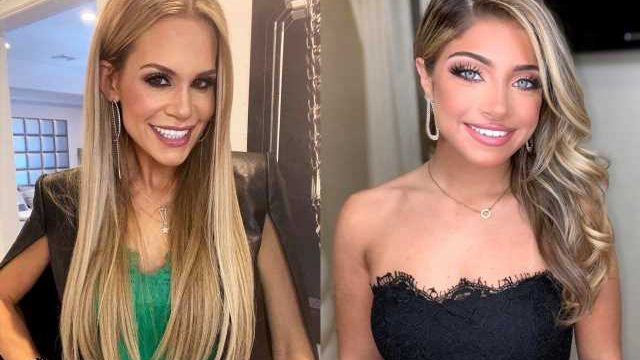 The tension between Jackie and Gia starts after the latter’s mom and the ‘Real Housewives of New Jersey’ star Teresa Giudice accused Jackie’s husband Evan of cheating.

AceShowbiz -“The Real Housewives of New Jersey” star Gia Giudice has reacted to Jackie Goldschneider making a drug analogy about her. Speaking with Andy Cohen on “Watch What Happens Live with Andy Cohen”, the daughter of Teresa Giudice blasted Jackie over her remarks that got her in trouble with her sorority.

“I, honestly, reached out to her,” Gia told the host in the Tuesday, April 27 episode of the talk show. “Because I had complaints from my sorority. I was almost put in a meeting because they wanted to make sure I was okay. I dealt with a lot of things because of this analogy, and I made her very aware of that.”

The 20-year-old continued to share, “And then, following that, she did apologize and then she did her Twitter apology, which I did… I, like, I thought it was alright, but it wasn’t anything too crazy.”

“I was, like, completely disgusted by it,” Gia added. “I never thought my name would be brought up, and especially being on the show for so long, no ‘Housewife’ has ever disrespected me and for one person to ever use my name in a poor manner, I was like, in shock.”

The tension between Jackie and Gia started after the latter’s mom Teresa accused Jackie’s husband Evan of cheating. Hitting back at the claims, Jackie revealed that she was hurt by the accusation, adding that it would be as if she spreaded false rumors that “Gia snorts coke in the bathroom at parties.”

Following backlash over her analogy, Jackie defended herself in a tweet back in February. “My analogy about Gia was simply an analogy – there was no truth to it of course. The rest of the cast understood this, which you’ll see in the coming weeks. The behavior at my husband’s birthday party is truly unfortunate – destroying a marriage and family is not entertainment,” she tweeted at the time.

In response to that, Gia wrote on her page, “Saying it was an analogy is making it excusable, it’s not. My character is now being questioned. My name was used to make a point. No one should be used in that way, I am suffering the consequences for such an outlandish and untrue statement. While her marriage is happy & in tact.”

Despite that, Gia urged her mom to apologize to Jackie for spreading the cheating rumors against Jackie’s husband. “She said something about me, she’s upset because you said something about her marriage. And not for nothing, if you went about it in a s***y way that upset her, then you should apologize,” Gia told Teresa in the February 24 episode of “RHONJ”. She added, “I’m sure you weren’t happy when cheating rumors were going on about you and dad. If you upset her, say sorry.”