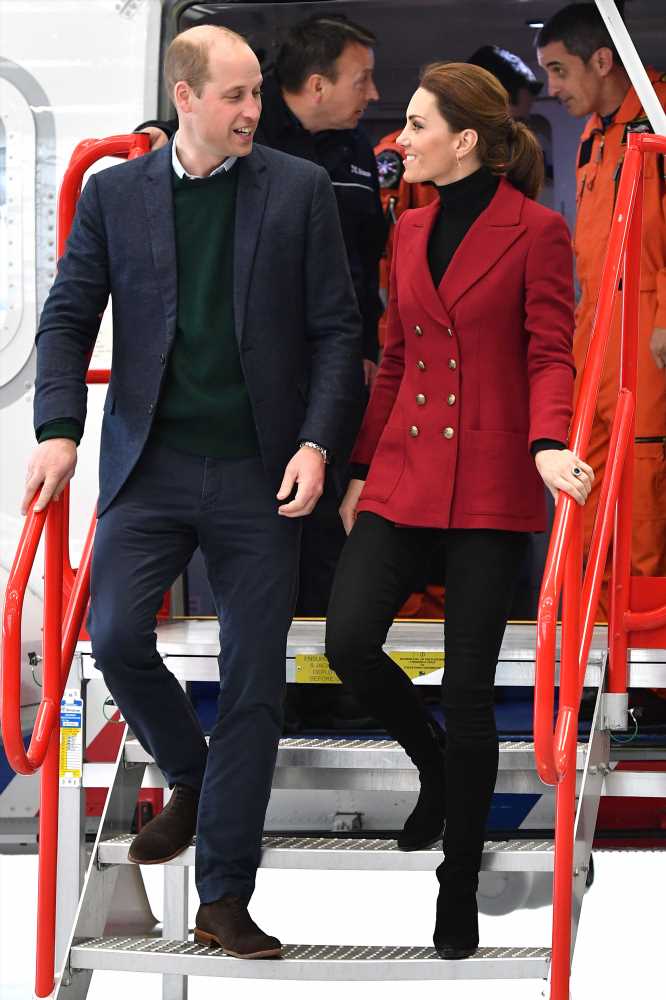 Prince William and Kate Middleton made a visit to North Wales on Wednesday — just as Baby Sussex was making his global debut!

Minutes after Prince Harry and Meghan Markle debuted Baby Sussex for the world to see, the Duke and Duchess of Cambridge arrived at the Caernarfon Coastguard Search and Rescue Helicopter Base.

Kate, 37, looked chic in a red double-breasted blazer with a black turtleneck and black pants.

While at the base, William and Kate toured the Coastguard’s new Sikorsky S92 helicopters. William, 36, worked as an Royal Air Force search-and-rescue pilot between 2010 and 2013 when the search and rescue operation was based out of RAF Valley in Anglesey.

Both William and Kate had previously sent their congratulations to Meghan Markle and Prince Harry after the birth of their newborn son.

On Tuesday, a day after the boy’s birth, William said he was “absolutely thrilled” for his brother and sister-in-law, adding he was “looking forward to seeing them in the next few days when things have quieted down.”

“I’m very pleased and glad to welcome my brother to the sleep deprivation society that is parenting!” he joked.

Kate reflected on what it’s like to be a new parent. “It’s really exciting for both of them,” she told reporters on Tuesday. “These next few weeks, it’s always very daunting first time around so wish them all the best.”

The mother of three added that she’s experienced with having children this time of year (Prince Louis was born last year on April 23, while Princess Charlotte celebrated her fourth birthday on May 2).

“It’s such a special time – with Louis and Charlotte just having had their birthdays. It’s such a great time of the year to have a baby. Spring’s in the air, so it’s really great,” she said. “As William said, look forward to meeting him and finding out what his name’s going to be.”

Megan and Harry introduced their first child Wednesday at St. George’s Hall in Windsor Castle (where they had their royal wedding reception!), just two days after welcoming the new addition to royal family.

Wearing a white sleeveless dress by Givenchy (her wedding dress designer), Meghan was glowing as she stood behind Harry, who held their newborn son in his arms.

Asked what it’s like being a new mom, Meghan said: “It’s magic. It’s pretty amazing. I have the best two guys in the world, so I’m really happy.”

She went on to say that Baby Sussex “has the sweetest temperament. He’s really calm.”

Harry then added, “I don’t know where he gets that from!”

“He’s just been a dream,” Meghan said. “It’s been a special couple of days.”