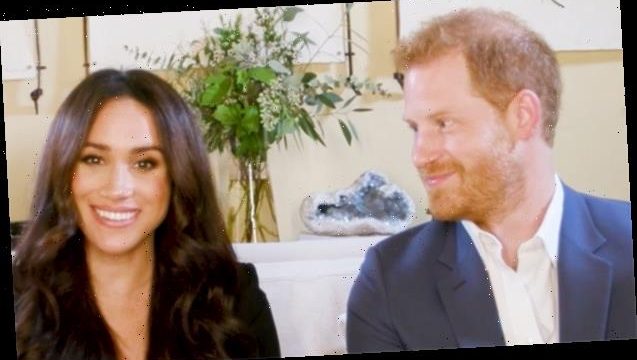 Prince Harry sure gave wife Meghan Markle an adoring look of love during their Time 100 Talk. He gazed at her as she gushed about their 17-month-old son Archie’s growth.

Prince Harry was positively beaming with pride at wife Meghan Markle during their latest online summit. The former Senior British Royals have come out as proponents of “humane tech” in a series of web discussions, and the 36-year-old prince couldn’t take his eyes off of his 39-year-old wife during their Oct. 20 Time 100 Talk. He beamed at Meghan as she told the magazine’s Editor-in-Chief and CEO Edward Felsenthal how the couple — as well as son Archie — is holding up in these restrictive COVID-19 times.

“All things considered everyone is grappling with a version of the same thing. And for us we are just trying to embrace all of the quality time we get with our son right now, and to not miss a single moment of his growth and development, which has been really special,” Meghan revealed about the couple’s 17-month-old son.

Harry and Meghan spoke remotely from the living room of their $14.6 million Montecito, CA mansion. It is the same location they have used for several other online discussions, including Meghan’s recent interview for Fortune magazine’s Most Powerful Women summit.

The white sofa and three print wall hangings featuring drawings of bird’s nests remained the same, but the background table has been switched up to include a large geode rock and a floral arrangement with greenery including eucalyptus sprigs. The larger display of coffee table books has been pared down to show just the hardcover photography book Women: The National Geographic Image Collection. It was first shown during Meghan’s Sept. 23 surprise appearance on NBC’s America’s Got Talent. She wished a contestant named Archie good luck via video, and gave a first glimpse at the couple’s living room and reading choices.

For the Time 100 Talk, Meghan wore the black Alexander McQueen pantsuit that she wore for the couple’s new black and white portrait together. It was released on Oct. 15 when the magazine’s talk was announced. She was seen seated in the elegant photo while smiling and looking down at the ground, while resting her arm against Harry’s leg. He sat next to her on the arm of the chair, while flashing a handsome grin at the camera.

Meghan famously opted for the McQueen pantsuit over a traditional gown for her first evening event as a future royal in Feb. 2018, when she wore the outfit to London’s Endeavour Fund Awards. She proved during her Time Talk that it looks just as sharp for a daytime discussion about online wellness as it did for a formal royal evening occasion.