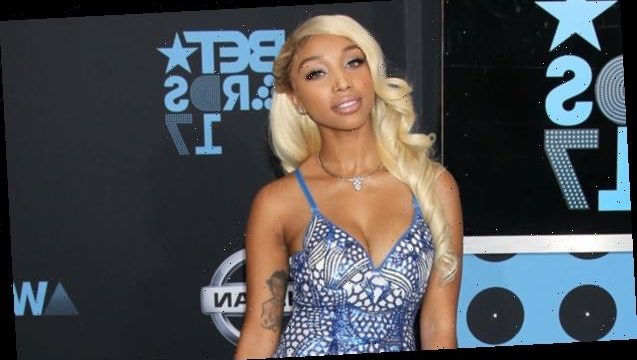 Zonnique Pullins, the daughter of Tameka ‘Tiny’ Harris and stepdaughter of rapper T.I., is expecting her first child. She gave fans another look at her growing bump in a tight bodysuit.

Tameka “Tiny” Harris’s daughter Zonnique Pullins, 24, offered fans a glimpse at her growing baby bump in her latest snap — and she looked so glam! The pregnant singer took to Instagram on September 25, and posted a pic of herself in a black bodysuit. “it’s me happy to pull up and eat somebody food up,” she wrote, crediting Fashion Nova for her skintight ensemble. Zonnique was sat at a long table, as she celebrated her step dad T.I.‘s 40th birthday.

it’s me happy to pull up and eat somebody food up😋 one piece: @fashionnova

She also wore an oversized dark denim jacket over her body suit, a black baseball cap, and black stilettos. She accessorized with a black Prada handbag, a silver “Z” necklace, and showed off her long, neon green nails as she held her hand up to her brunette tresses. “MOOD! Somebody food be good af every time!!!! LOL,” one fan wrote, while hundreds of others dropped heart eye emojis in the comments.

Her boyfriend Bandhunta Izzy, 23 (née Israel James), with whom she’s expecting a baby also commented, “Hey baby mama,” followed by four heart emojis. Zonnique spoke to HollywoodLife exclusively about how she broke the news of her pregnancy to stepdad T.I. “Well, it was a little bit of me and the producers [of The Mix]. I wanted to go out with a bang on the show,” she said about her approach to telling him.

“So I’m like, ‘Yeah, let’s tell them on the show, whatever it’s not a big deal!’ even though it was a big deal for me to just tell him regularly at first,” she added. “But I’m like, ‘OK, we can just tell him. It’s whatever. So yeah, we all came together and we’re like, ‘OK, let’s do it.’” Zonnique even told HL that her stepdad thought it was a joke at first!