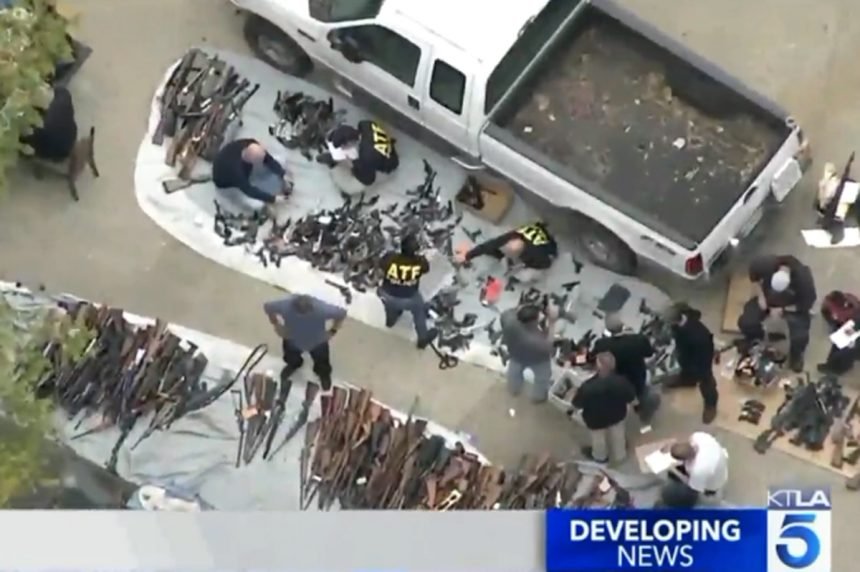 Over 1,000 weapons have been seized by the Los Angeles Police Department from a mansion linked to the famous Getty family.

According to reports, authorities received a tip of an “individual selling and manufacturing illegal firearms” at the 100 block of North Beverly Glen Boulevard in Bel Air — prompting the LAPD and The Bureau of Alcohol, Tobacco, Firearms and Explosives to conduct a search warrant on Wednesday.

There, they discovered a collection of rifles, shotguns and handguns. Shortly after, authorities arrested Girard Saenz inside the home on suspicion of distributing, transporting, importing, selling, or lending an assault weapon. Police say the 57-year-old is being held on a $50,000 bail.

The LAPD confirmed to People that “there’s been over a thousand guns seized” and “an individual being question.”

Police were baffled to find this massive collection of illegal weapons inside the Bel Air residence, seeing as it’s located up the street from the Playboy Mansion and rests in the pricey Holmby Hills area, where many of El Lay’s wealthiest (including Beyoncé and JAY-Z) call home.

Speaking to KTLA, LAPD Lt. Chris Ramirez revealed that the guns are “of all makes, calibers and models” and that over “1,000 rounds of live ammunition” were seized from the residence. He explained to the news outlet:

“This is a big stash. It’s beyond comprehension that somebody can have so many weapons in a residence like this, in a neighborhood like this.”

Public records state that the home is owned by Cynthia Beck, who has three daughters from her infamous affair with J. Paul Getty’s son, Gordon Getty. While many people in the family’s inner circle knew about the businessman’s secret life with his mistress — including his wife Anne, with whom he had four sons — Gordon’s affair with Cynthia became public knowledge in 1999.

Beck was not at the property when the official search and seizure took place, and it’s unclear if she’s the person being interviewed by police. (The most information known of her whereabouts is that she’s somewhere in Europe, so gurl might be hard to track down.)

It’s also unknown if Beck has any involvement in the weapons or the search warrant, though it’s worth noting that she owns a few properties with Saenz.

The investigation is still ongoing… but at least we can breathe easy knowing that the Playmates and Blue Ivy are safe!