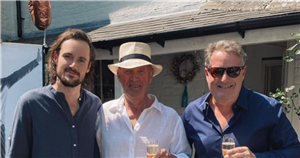 Piers Morgan has reunited with his family to celebrate his dad's 80th birthday with a party in the garden.

The presenter, who recently hit out at Prince Harry once again, took to his Instagram feed to document his fun day with his family.

In one snap, the 56-year-old posed with his dad Glynne and son Spencer as they enjoyed some champagne. The outspoken star also posed with his wife Celia Walden as well as other family members as they enjoyed cigars and wine.

Piers' son Spencer took to his own Instagram to share moments from the day, as he posted a clip of his dad and other family members dancing to a Frank Sinatra song.

The former Good Morning Britain host was also seen engaging in an arm-wrestling match, which he ended up losing.

This comes after Piers said ITV bosses have reached out for him to return to GMB following his exit. Piers stormed off set following a fiery showdown with weatherman Alex Beresford and later quit the ITV daytime programme after ITV bosses asked him to apologise for his comments on the Duchess of Sussex speaking out about her mental health.

Months after his exit, ITV are yet to permanently replace Piers – with Bill Turnbull and Alastair Campbell temporarily stepping in to fill Piers' former seat.

And now Piers has claimed ITV have "reached out" to ask him to return to the show.

The Life Stories host revealed: “They reached out — there have been approaches. Never say never." He continued to tell The Sun Online: "I have had some quite random third-party feelers put out to see if I would consider a return to the show.

"I don’t want to say on the record who, but a pretty close third-party…

"As the Americans say, they reached out — there have been approaches to test the water in the wake of their obvious ratings issues.

"It makes me sad to see all the hard work we did to beat the BBC in viewing numbers evaporate so fast. It’s their problem to work out . . . but never say never."