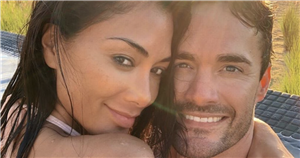 Nicole Scherzinger and her boyfriend Thom Evans are so loved up that they are planning marriage and kids, a source has exclusively revealed to OK!.

The couple, who met on X Factor: Celebrity in 2019, have been spotted looking super cosy lately and were this week seen taking photos and smiling as they enjoyed a private boat trip in Mykonos.

And the cute pair, who also celebrated Nicole's 43rd birthday with an epic trip to Lake Como, are said to be "definitely" ready to start a family.

A source told OK!: "Nicole and Thom are extremely loved up. They work as a duo so well. Although Nicole is the bread-winner, it doesn’t seem to matter. They have a great connection and get on so well.

“They’re thinking about starting a family. Because of Nicole’s age, they want to start soon. She knows that time is ticking," our source added, noting that 36 year old Thom is also keen to become a parent.

They said: “Thom has always wanted to be a dad and he would love to have a baby. He’s from a very close family. But he wants to do it the right way. He’s very traditional and he wants to get married first.

"Marriage and babies are definitely on the cards for these two.”

Nicole looked the picture of style during their Mykonos trip, as she covered up in a bright pink Kaftan and a big floppy hat. The former Pussycat Doll completed her look with a large pair of sunglasses and wore her long tresses loose.

Meanwhile, Thom paired a yellow striped shirt with shorts and clutched at a bottle of fizz.

In a touching tribute on his social media, Thom wished his girlfriend many happy returns by saying: "I hope your Birthday was as Beautiful and full of love as you are @nicolescherzinger I love you very much."

It's been a year of whirlwind romantic adventures for the loved-up couple. The sweet pair celebrated New Year on an exotic beach, and jetted off to Hawaii at Easter and now they've been spotted having a whale of a time in Lake Como, Portugal and Monaco.

Earlier this year, the pair publicly marked their first anniversary together. Thom told his Instagram followers: "In a year that's been filled with so much uncertainty, you have been my shining light."

Nicole replied: "You are my rock. I thank God for you every day. I love you so much.”

Thom also posted a tribute to his girlfriend on International Women's Day, saying: "Thank you @nicolescherzinger for being a strong, independent and loving woman. I am immensely proud of you and everything that you stand for."