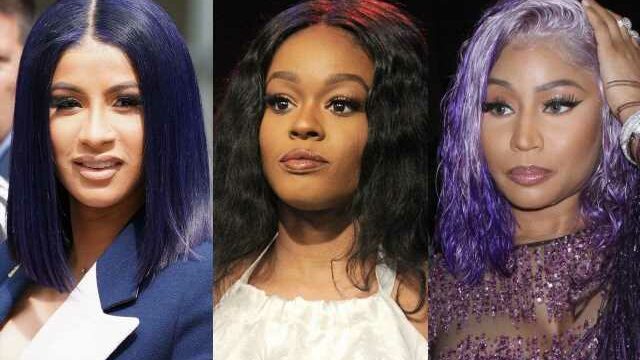 The Harajuku Barbie turns to her social media platform after being called out by the ‘Anna Wintour’ raptress for her obsession with the ‘Bodak Yellow’ spitter.

AceShowbiz –Nicki Minaj is not letting anyone take her down. The “Anaconda” hitmaker has dubbed herself “best b***h in the whole wide world” after Azealia Banks ripped her obsession with Cardi B.

Nicki Minaj tweeted after Azealia Banks called her out for her ‘obsession’ with Cardi B.

Nicki’s tweet came a few hours after Azealia called her out in a social media rant. “Nicki is so obsessed with Cardi it’s only making me like cardi more,” the “Anna Wintour” raptress wrote via Instagram Story. “Like I’m perched for C2… Nicki is giving twenty levels of peasy black girl with the burnt perm who is jealous of the Spanish girl that just moved down the block.”

Azealia further said Nicki should’ve collaborated with Cardi and other women instead of beefing with them. The outspoken rapper claimed Nicki’s behavior proved the Harajuku Barbie relied on “tokenism” throughout her career.

“A smart Nicki would have done the cardi, [Doja Cat], [Megan Thee Stallion] collabs smiled in their faces while safaree worked on her album in the background then came through and dominated,” Azealia added. “Without showing the world how desperately you’ve relied on tokenism and sabotaging other black female rappers behind the scenes. Like it was an eassssssssy plan but no… We wanna feed the baby chicken bones, Defend white girls in blackface, And give sex offender p***y.”

Azealia’s social media rant arrived after Nicki and Cardi appeared to hurl insults at each other. On Monday, September 26, Cardi posted a series of sexy snapshots with her husband Offset after she was involved in a Twitter war with Nicki’s collaborator Akbar V.