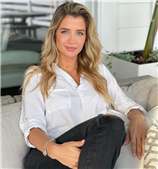 She left Metul Shah and returned to South Carolina, taking comfort in friends.

The gorgeous former Southern Charm star has also received a massive outpouring of support from fans.

It means so much to her.

Naomie Olindo is 28, beautiful, and famous — but that doesn’t mean that her life is perfect.

Breakups are hard. Breakups when your boyfriend of three years was reportedly cheating with his ex? Ouch.

Fortunately, Naomie has a support system in place — and she’s giving a major shoutout to show her gratitude.

Naomie is the founder of L’Abeye.

A customer had shared their order, posted a pic, and captioned it with “We love you @Naomie_Olindo.”

Naomie then shared that post to her own Stories, with a little something extra.

“You guys have blown me away this week,” she wrote over the weekend.

“So so so so thankful,” Naomie expressed.

There are times when the idea of gender solidarity is misused, absolutely.

But in this case? It can be wholesome and empowering.

It was a difficult choice for Naomie and Metul to move up to New York together.

Metul had landed a residency that he couldn’t turn down, and Naomie was thoroughly invested in the relationship.

She left behind her friends to move with Metul — one year into a pandemic, no less — to a new city where she didn’t know anyone.

That was not the first sacrifice that she made for that relationship, either.

More than one year ago, Naomie was one of a slew of Southern Charm stars who left the series.

Like the others, she had multiple reasons for departing.

But one of Naomie’s reasons for declining to be part of the series was her relationship.

She had witnessed firsthand the added strain that reality television puts onto relationships and even marriages.

Naomie did not want a reality TV gig to cost her a chance at happiness.

Unfortunately, and as you probably already know, men.

Cheating rumors circulated on social media, including alleged screenshots from private conversations between Metul and an ex of his.

These were, ahem, not the kinds of conversations that someone in a monogamous relationship should have with an ex.

Naomie saw those “terrible messages” too, and soon, almost all traces of Metul were purged from her Instagram account.

It was not long before a heartbroken Naomie took to Instagram to confirm the breakup to her fans and followers.

Ever the class act, Naomie also asked fans to please not direct hate at Metul, noting that he was going through a hard time.

Metul Shah’s hard time was one of his own making, but still, Naomie did not want him bombarded by trolls or shaming.

Not everyone would feel that generous after their boyfriend of three years cheated on them.

But one of the reasons that Naomie has so many fans to begin with is that she’s that kind of person.