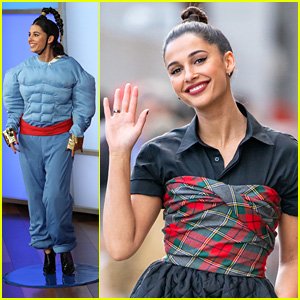 Naomi Scott has us LOL-ing all over during this sneak peek of her appearance on The Ellen DeGeneres Show today!

The 26-year-old actress, along with her Aladdin co-stars Mena Massoud and Will Smith, stopped by the program to chat up their new film, and Naomi and Mena got the chance to switch roles be the Genie!

PHOTOS: Check out the latest pics of Naomi Scott

Later on, Naomi was spotted arriving with husband Jordan Spence for her appearance on Jimmy Kimmel Live.