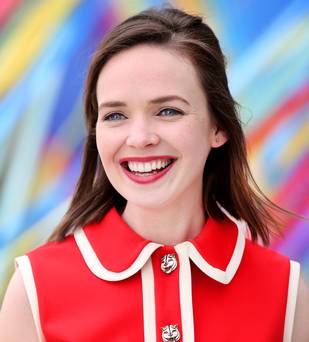 They say a good friend knows all your best stories, but a best friend has lived them with you and RTE star Eileen O’Higgins is no different when it comes to her closest buddy.

Except, of course, her best friend also happens to be three-times Oscar nominated Saoirse Ronan.

The pair have worked on two major Hollywood films together and Saoirse even gave Eileen a shout-out on stage at the Golden Globes.

But Eileen, who will star in the hotly-anticipated new RTE series Dead Still, still swears they are your typical girls. “It’s not that different to [other friendships]. We are just best mates and we do everything the exact same as everybody else would. We order takeaways and go on adventures. It’s very ordinary and boring,” she says.

With the exception perhaps of working alongside the world’s biggest stars – such as Margot Robbie – and attending the Golden Globes together which Eileen describes as akin to “being in Madame Tussauds”.

One such party circuit highlight struck when she met Tom Hanks, years after she had sent him fan mail as a child.

After taking time off school to see Apollo 13, Eileen decided to reach out: “I used to be obsessed with him,” she says, “so I decided to write him a letter detailing how good he was in every film.

“I thought – for people that you didn’t know – it was like Santa Claus. When you want to send them something, you just put it up the chimney because that’s how you communicate with people from TV,” she laughs.

“So, when I saw him at the Golden Globes, I was staring at him with my mouth open.

“He had a massive tray of drinks for his table and they were going over my head at the time and he just went [teasing me in an American accent], ‘Not for youuuuuuu.’ I thought, ‘It is you [I am looking at] I don’t care what is on the tray.'”

Speaking about Saoirse’s influence, she said: “It is lovely having somebody that understands the world that you move in and you become like family when you are on jobs together. I worked on two films with her and both were done over long time periods and it felt very much like they were family.”

She added: “I love working with Saoirse because she is one of the most talented people I have ever worked with.

“You can see that from her work ethic and how sensational she is. She has the most incredible instincts and she is incredibly generous as a performer. She makes other people better in response to her. You learn a lot,” she said.

Speaking about Dead Still, which she describes as “a dark comedy”, she says: “We are memorial photographers so people come to us when a loved one passes away and they want a photograph taken.

“People will be surprised by it. It’s so different to anything they would have seen and it captures the nature of Irish people, what it means to be Irish and the banter.”