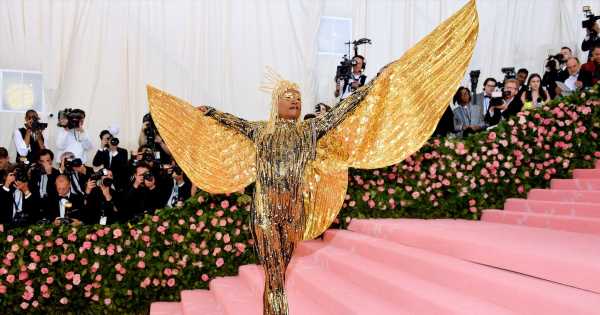 The Met Gala red carpet is famously extravagant, and this year has definitely delivered some of the wackiest look yet.

With a theme of Camp: Notes on Fashion, guests at the Met Gala 2019 have really gone above and beyond and there have been some outrageous outfits on the red carpet tonight.

The best dressed have done a stellar job of meeting the Camp theme, while the Met Gala worst dressed turned heads for all the wrong reasons.

Check out some of the most outrageous looks from the Met Gala red carpet here:

Lady Gaga landed herself a place on the worst dressed list due to the fact she did a strip on the red carpet and ended up with no dress at by the time she went in.

She pulled off three dresses to strut in front of the cameras in nothing but her underwear and a pair of boots.

We know less is more, but this is the Met Gala!

There was strong competition for the wackiest outfit of the evening from Blly Porter, who came dressed as a golden angel.

He was even carried onto the carpet on a throne carried by topless hunks dressed as Egyptian slaves.

Less outlandish, but no less unusual was Harry Styles and his frilly see-through blouse.

The former One Direction star teamed the bizarre lacy number with tapered trousers and high-heeled boots.

Earlier this evening, many the event's big stars gave fans a glimpse of their preparations as they got ready for the big night.

While some were downing vodka shots, others crammed in last-minute facials to make sure they look their best for fashion's big night out.

Models Bella Hadid and Hailey Baldwin took their prep really seriously as they both had pro facials in the hours before the event.

Bella shared a clip of her laser facial, while Hailey also had a last-minute skin treatment.

Bella's sister Gigi let her hair down in the hours before the ball, sharing snaps of herself eating takeaway noodles and holding a bottle of vodka she'd been given.

Lady Gaga, who is co-chair of tonight's bash, flew in on a private jet and revealed she hadn't shaved her legs in four days.

Tennis ace Serena Williams managed to get in a last-minute ball game as she the hit court before heading into hair and make-up.

Reality TV star Kim Kardashian started her prep by giving fans a run down of all the previous outfits she wore.

Kim told them how much she loved each of the designer creations she wore to all the other Met Balls, teasing fans that tonight's costume could be her favourite of the lot.