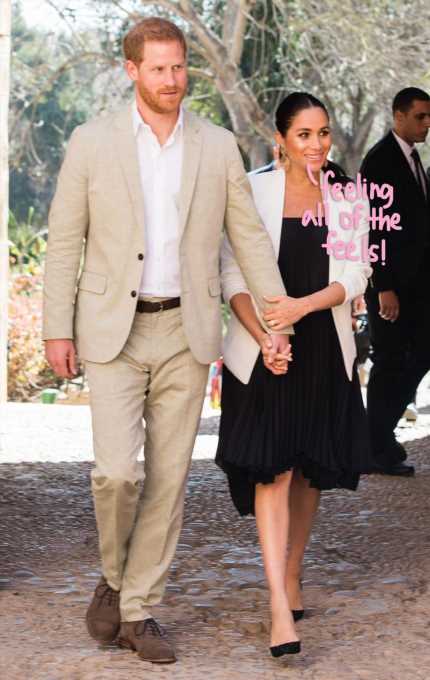 The news of Meghan Markle and Prince Harry‘s precious newborn son is still giving us all the feels!

On Wednesday, the new parents stepped out with their son at St. George’s Hall in Windsor Castle to introduce the kiddo to the public, only to later reveal his name as Archie Harrison Mountbatten-Windsor.

And even though the Duke and Duchess of Sussex have been all smiles lately, a source recently revealed that momma Meghan has been very emotional lately, too!

This is hardly a surprise to hear, as we can’t think of anything equally exciting, emotional, and nerve-wracking as becoming a new parent.

The source tells Us Weekly that the Suits alum went into labor “just after midnight” on Monday morning, with a second source adding that the 37-year-old has been “thrilled and, of course, very emotional” ever since.

Considering the busy week they’ve had, the couple still looked absolutely stunning when speaking to the press this week. If you haven’t already, ch-ch-check out the beautiful new family of three HERE.

For starters, Duchess Meghan ditched protocol and celebrated her baby’s arrival with a lavish, baby shower across the pond. She also opted to keep the details of her due date pretty hush hush up until the last minute. The palace’s casual Instagram announcement that simply read, “it’s a boy!”, came as a total unconventional surprise to the public, too.

Royal historian Marlene Koenig tells E! News that we should come to expect more of this independent behavior from the Duke of Sussex and his wife, saying:

“The Duke and Duchess of Sussex have been doing things their way. The original announcement seemed a bit chaotic—announcing that the Duchess was in labor (past tense) with another announcement shortly released after the baby was born.”

“The official announcement did not have the place of birth nor the name of the medical staff, which is not usual as doctors have been listed on such announcements for more than 200 years.”

Leave it to our girl Meghan to shake things up, just like we knew she would!

Perezcious readers, what other surprises do you think are in store for the royal family and the baby of Sussex?