Demi Lovato is learning to love herself more and more each day with the help of her fiancé Max Ehrich. Lovato has long been outspoken about her experience with mental health, and now more than ever, she’s been sharing her journey to self-acceptance with her fans on social media. That’s why Max Ehrich’s response to Demi Lovato saying to "ignore" her double chin proves he’s got her best interest at hand.

Lovato and Ehrich got engaged in July, and she hasn’t stopped gushing over how her husband-to-be makes her feel like the luckiest person in the world. "I’ve never felt so unconditionally loved by someone in my life (other than my parents) flaws and all," Lovato wrote in an Instagram post announcing her engagement. "You never pressure me to be anything other than myself. And you make me want to be the best version of myself."

Since then, Lovato has showed off her newfound confidence on social media, often crediting Ehrich for much of her happiness. After posting some super glam IG photos in late August and early September, Lovato let fans in on her personal conversations with Ehrich that show just how supportive of her he is.

While getting her hair done, Lovato snapped a silly selfie to send to Ehrich, which he responded to with, "Awwwww babyyyy," and multiple heart-eye emojis. 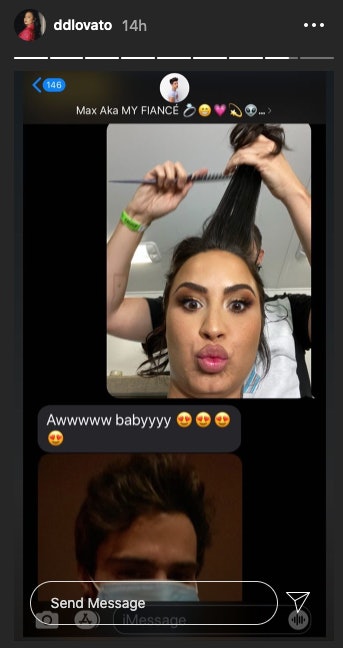 Ehrich followed up the text by sending Lovato one of himself wearing a mask, and while Lovato responded with "I love you," she also turned the convo back to her pic asking her beau to "ignore" her "double chin." 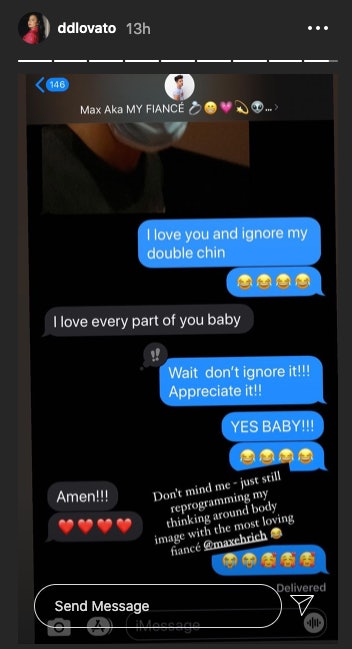 "I love every part of you baby," Ehrich replied, which sparked Lovato to practice some self-love of her own. "Don’t ignore it!" she wrote back. "Appreciate it!"

Lovato shared screenshots of the sweet conversation and told fans she’s "still reprogramming" her "thinking around body image with the most loving fiancé."

Lovato and Ehrich are definitely each other’s biggest fans and their constant support of one another shows just that.