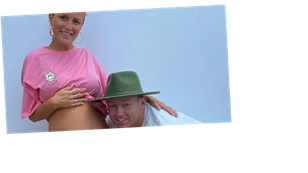 After her stint on Married At First Sight Australia, star of the show Susie Bradley is now engaged to ex-NRL football player Todd Carney and is expecting her first child with him.

The reality star posed for a series of pictures alongside her husband-to-be Todd and showed off her blossoming baby bump.

Susie and Todd have been together on and off for nearly two years and the couple revealed they were expecting a baby boy on New Year's Eve.

Todd, also 34, shared a sweet video of the gender reveal on his Instagram, which showed him kicking a ball into the air and it producing a blue powder.

He then got down on one knee and asked the love of his life to marry him.

Todd captioned it: "We all have dreams and in 2020 all mine have come true. 2021 my greatest gift is going to happen with a little todd on the way and I'll marry my best friend."

Susie shot to fame on the second season of Married At First Sight Australia in 2019 and was partnered with Billy Vincent.

The pair did not click and ended up embroiled in several arguments, thus choosing to end their marriage before the show was even over.

Susie was accused of 'bullying' Billy by fans after she mocked him for crying.

On the show, Billy said: "I don't mean to be spiteful or anything, but this experience has been one of the worst of my life.

He later described Susie as a "rude, obnoxious, nasty woman."

Fans took to Twitter to slam Susie's behaviour and to share their views on the failed coupling.

One fan said: "that Susie on married at first sight Australia is getting on my nerves!!! Why would you complain about receiving compliments?! Billy deserves better the wee soul."

"Genuinely have to fast forward every time Susie is on Married At First Sight cos I can't sit and watch her abuse Billy," a Twitter user expressed.

A third added: "Well Susie on Married at first sight is not a very nice person. She is self centered, narcissistic and I would go as far as saying, an absolute bully!!!"

While a fourth agreed: "I thought Married At First Sight Australia couldn't top it with Ines..but then they go and bring out Susie. Next level madness."