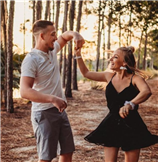 Mackenzie McKee is celebrating her eight-year wedding anniversary this week.

And she’s doing it in most unusual fashion:

By bragging openly about how often both she and her husband, Josh, have cheated on each other.

On Tuesday, McKee posted the photo above on her official Instagram page and wrote as a very simple caption:

“Happy 8 year wedding anniversary to the man who has the patience of a saint.”

This would be a very sweet and sentimental statement — if not for a couple significant details Mackenzie failed to include.

Namely: Josh committed adultery on at least one occasion and McKee made a very overt showing of leaving him as a result.

She eventually took him back for the sake of the couple’s kids… and that’s cool and all. It’s really none of our business.

But McKee has conveniently skipped over here the whole part where she trashed Josh as an awful human being.

A host of observers were quick to remind Mackenzie of all her relationship obstacles in the wake of her anniversary tribute, which prompted quite a response from the Teen Mom OG cast member:

She fired back that she’s proud the spouses slept with other people.

“He cheated once and I cheated 3 times we do we only point the fingers at him lol. I’m just saying.

“I’m glad he did what [ge] did and I did what I did. We were young and we are so much stronger now.

“Alll y’all can shove it i just wanted to post one damn photo.”

This is the second time in a matter of months that Mackenzie has flaunted her infidelity — and we get her broader point.

She doesn’t want to be known as a pushover, or to be considered weak for having taken back a cheater.

She’s prefer to be known as a liar and as someone who would step out on her husband, we guess.

“I’m happy your marriage is perfect. But mine isn’t and this is our story,” she added in response to the latest backlash.

Continued the mother of three:

“Please stop saying I fought to keep him. Y’all I will never fight for a man. The show is so off from how things really are. I’m not a weak bitch.”

Elsewhere in her very defensive rant, Mackenzie made the somewhat unusual argument that one should never fight for one’s marriage.

“Ladies. When times get tough. Walk away,” she wrote.

“If it works out it was meant to be. Stop putting me in a category with the women who fight for a marriage.

“Who fights for a marriage? Not me.

“I will leave and gif you don’t come back for me, BYE!”

To be kind of fair here, McKee did move to Florida after she accused Josh of sleeping with her cousin.

She did make a point of separating from him.

But Josh allegedly pursued his wife and wanted to reconcile and now here they are, married for eight years.

The vows do say for better or for worse, we suppose, don’t they?