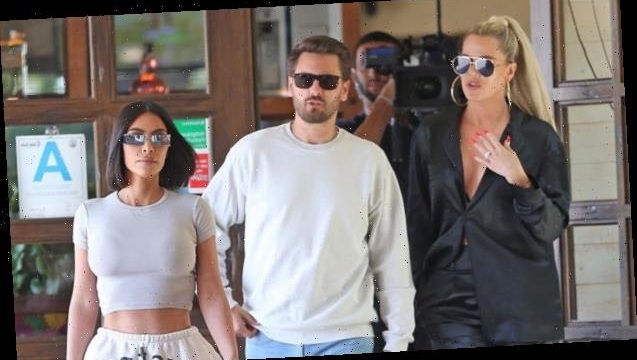 Kim Kardashian, sis Khloe and Scott Disick have been spotted filming ‘KUWTK’ on the beach in Malibu. The final season of their long running show is set to air next year.

Just days after revealing the long-running reality series Keeping Up With The Kardashians will air its final season in 2021, Kim Kardashian was spotted filming on the beach in Malibu with her family — you can see the photos here. She was seen on September 11 with Khloe Kardashian and Scott Disick, strolling on the sand while E! cameras rolled. The trio filmed scenes for the upcoming 20th season of the reality show, which will premiere early next year. Kim wore a matching set including a cream top with long sleeves, and an ankle-length tight skirt. She wore her long brunette tresses out in a sleek, straight style. Meanwhile, Khloe rocked a black and white hoodie and high-waisted jeans with dark sunglasses. Scott opted for a black sweater and shorts, which he paired with dark sneakers.

They were seen walking along the shoreline, however it wasn’t an ideal beach day, as dark smoky clouds could be seen in the distance. While crew members wore protective face coverings amid the global COVID-19 pandemic, neither Kim, Khloe or Scott were seen wearing one. It comes three days after the shock announcement that KUWTK would come to an end, after more than a decade on our TV screens.

It was announced on September 8 that the series would end, and although Kourtney Kardashian has long made it clear that she wants to step away from productions, news of KUWTK ending all together had blindsided fans. Kim was the first member of the family to make the shock announcement on her social media.

I am so grateful and thankful to everyone who has supported us and been there through it all. I’m too emotional to fully express myself at the moment. My sappy post will come soon. Change is hard but also needed at times❤️💔❤️💔 I love you all. Thank you for the memories!

“It is with heavy hearts that we’ve made the difficult decision as a family to say goodbye to Keeping Up with the Kardashians. After what will be 14 years, 20 seasons, hundreds of episodes and numerous spin-off shows, we are beyond grateful to all of you who’ve watched us for all of these years – through the good times, the bad times, the happiness, the tears, and the many relationships and children. We’ll forever cherish the wonderful memories and countless people we’ve met along the way,” she wrote. Looks like we’ll just have to keep up with the KarJenners via social media.