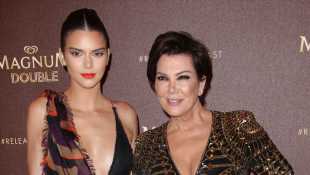 Ahead of the 2019 Met Gala, Kendall Jenner revealed in a new sit-down interview that she wants to cut her hair short – but she’s afraid she’ll look too much like mom Kris Jenner!

One of the requirements of Kendall Jenner’s job as a model is that she can transform into any look a designer wants. And part of that transformation has to do with her hair. The 23-year-old reality television star said she’s considering her own personal transformation in a new interview with E! News – she is considering chopping off her hair. “I think about shaving it all off sometimes,” the star revealed. “Not like a buzz. But I think about chopping it off, yeah.”

But she admitted that there’s one small problem with cutting her hair off – she fears she looks too much like her mom, Kris Jenner, 63, who has a signature pixie cut! “If I cut my hair that short, then I just look like my mom! I’ve been on sets before and they’ve put short wigs on me like my mom. It’s too much, I literally am a mini-Kris Jenner. Some of my friends are trying to push me to do it.”

Kendall previously said in the interview that she has gotten it cut short before, so it isn’t too unprecedented. “I chopped it a couple of years ago, pretty short,” she said. “I had short hair for a little while, I’m growing it out now. I didn’t plan for it, but I stopped cutting it.”

Kendall then talked about her excitement for the upcoming Met Gala at the Metropolitan Museum of Art in New York City on May 6. We can’t wait to see what she wears on the carpet – maybe it’ll even be her debut for her “shaved off” hair!