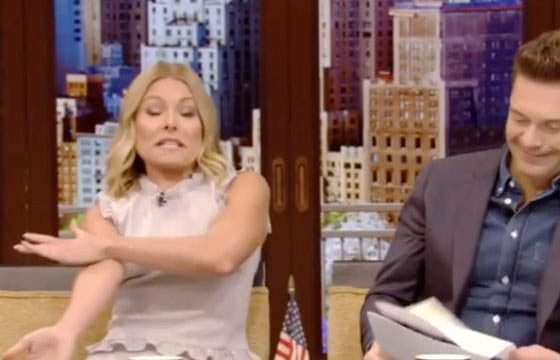 Kelly Ripa got a strongly worded email and a tense phone call this morning for sure, because she has come after one of the biggest shows on ABC, which her morning show Live With Kelly And Ryan is on. On her show yesterday, Kelly said that she loathes The Bachelor and The Bachelorette. In fact she says they’re “disgusting”. As disgusting as working with Ryan Seacrest? Well, now two of the dons of Bachelor Nation are checking Kelly for trying to drag their money-making, engagement-slinging, relationship-regurgitating, scripted television behemoth.

Us Weekly reports that Kelly and Ryan were discussing the events of Monday night’s season premiere of The Bachelorette and how new Bachelorette, Hannah Brown, was doing in the first episode of her reverse-harem reality series. And Kelly hated it. She didn’t watch it, but hearing Ryan talk about it was enough to make her skin crawl and she let us all know it. Kelly then let out a devastating critique of The Bachelor and all the wine-drunk late-to-middle aged women (and me) who are watching it:

“You guys, you know how I feel about this show: it disgusts me. And I thought I was disgusted because I couldn’t stand the idea of 25 exceptional women fighting over one ordinary fella. You know how I feel ladies: we are too special to be arguing over a guy… Having said that, all of you women watch that gross, gross show.”

Well listen, Kelly doesn’t like or watch The Bachelor so she obviously isn’t aware of Bachelor Nation, but it’s sort of like the Beyhive for white people who watch The Bachelor. You don’t want to cross them. And two of the main figures of Bachelor Nation, the creator of the show, Mike Fleiss, and the eternal host who makes more money than you’d think someone could by “hosting” something, Chris Harrison (who has guest co-hosted on Live before) both sent their Twitter followers after Kelly when they dragged her on Twitter:

Kelly Ripa is going to have a lot of angry ladies in her mentions this week while they keep trashing her for hating on their fave trash TV show. Meanwhile, no one better tell her about Bachelor In Paradise. If she hates The Bachelor and The Bachelorette she will explode when she hears about Bachelor In Paradise. That show cuts out all the false-pretences of “love” and “meeting your lifetime match”–it is about producers plying those sun-drenched hotties with alcohol and watching them fight and fuck.

And expect ABC to announce that Kelly is taking a leave of absence for a “sickness” and will be replaced by Chris Harrison.