Just like any proud new parents, Princess Kate and Prince William put a great deal of thought and care into choosing the names of their three children.

The Princess of Wales spoke about the pressure they faced at the time as she visited the maternity unit at the Royal Surrey County Hospital in Guildford on Wednesday.

Kate spent the day talking to new parents and staff – and the relatable royal drew on her own personal experiences as she met with mothers.

Kate became a first-time mother on 22 July 2013 when she welcomed her oldest son, Prince George, Princess Charlotte followed in May 2015, and then little Prince Louis in April 2018.

“She just really talked about her own children including how they chose their names,” Amy shared with People. “A lot of the new mums and dads are thinking about how to choose names for their babies, and they spoke with her about how Kate and William made their choice.

“She said they were their favourite names and that obviously the world was waiting for them to name their children — and that felt like quite a big pressure!” she added, with a laugh.

MORE: How Princess Kate reassured her children during heartbreaking funeral

At one point during her visit, Kate met baby Giles Talbot-Erasmus, and admitted: “I keep thinking Louis is a baby but he’s a big boy now. I just feels like yesterday.” 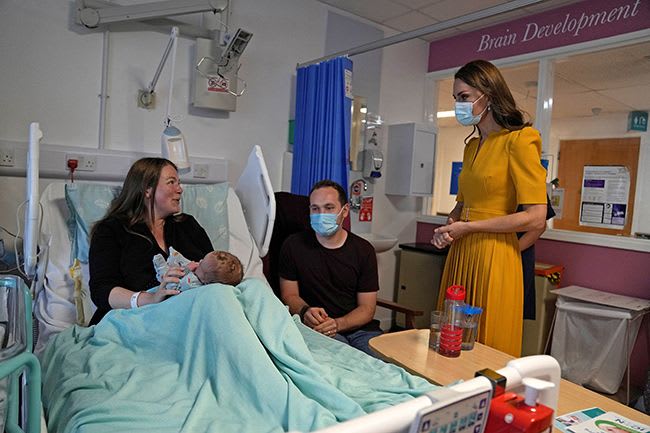 Admiring the newborn’s mittens, she then added of his little scrunched up pose: “George was so huddled up too, he spent quite a few days like that.”

Kate also enjoyed a cuddle with little Bianca Moran, who was born at 34 weeks and five days and is being looked after by a specialist team at the hospital. “She’s very sweet,” the Princess told Bianca’s mum Sylvia.

The Princess’s visit included time with babies who had been born in the previous 48 hours, and she empathised with their parents’ birth stories.

The Princess is a very proud mother of three

Kate thoughtfully said: “No matter how much everyone tells you what you expect, it’s a shock to the system isn’t it? You have this idea of what will happen but every single birth is different.”

She went on: “As nurturing as I know the hospital is, there’s nothing like being in your own home. And I bet your families are desperate to see you all.”