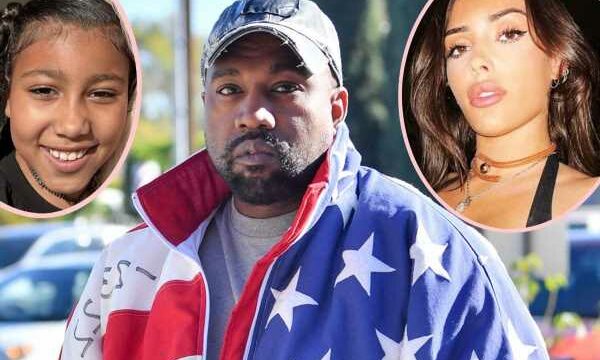 After the controversial rapper got married to Yeezy architect Bianca Censori earlier this month, it would seem that he’s ready to start integrating her into his family life… Beginning with daughter North West. In photos acquired by the DailyMail, you can see the new couple arriving at the Kardashian-approved Nobu restaurant in Malibu, California Sunday evening.

The 45-year-old can be seen in a green puffer jacket, accompanied by black cargo pants with patches over the knees, and black combat boots. For his 27-year-old bride’s part, she was seen with slicked back blonde hair, an oversized leather jacket, black tights, and furry white boots. Oh, and if you were wondering, Ye DEF had a band around that finger! The newlyweds arrived just before the Hurricane artist’s nine-year-old daughter, who was spotted in an oversized black hoodie and black jeans, with her hair in pink and white braids.

If you’re a fan of the Kardashians, you’ll know Nobu has been a signature place for family events and filming for YEARS, so could it be that the location was strategically selected so pics of the meeting could get out?? Oh, Ye… Definitely seems like he’s attempting some sort of rebrand after his relentless antisemitic rants. We wonder what North’s take on her new stepmom is, and how she’s going about processing the news of her father’s latest romantic endeavor… One thing we do know for sure is the young TikTok star will keep it real.

As for the blonde designer’s side of the family, Kanye’s got time to share. The Herald Sun reported Sunday that the two are set to head to the land down under, where Bianca was born and raised, so the Donda artist can meet his new in-laws. The outlet reported he, “is believed to be heading to Melbourne to meet her family,” where the pair, “will spend time in Ivanhoe, east of the CBD, where Censori grew up.”

We previously reported that while Kim Kardashian isn’t necessarily the biggest fan of her ex-husband’s new flame, Bianca’s family seems to be handling the news quite well. Her sister, Angelina Censori, told the outlet earlier this month:

“It’s very exciting news for both my sister and the family but we choose to have some privacy for the time being.”

Alyssa Censori, another relative, added at the time she was “so happy for them both.”

We’ll just have to wait and see how this all continues to play out. What are YOUR thoughts on the Censoris and Wests blending together, Perezcious readers? Spill in the comments down below!