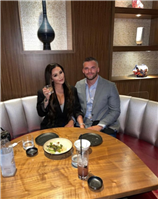 Jenni “JWoww” Farley has never been shy about the fact that she’s had some work done.

In fact, unlike so many other reality TV icons, the Jersey Shore star seems to take pride in paying good money to enhance her appearance.

Usually, the comments that Jenni receives on her pics are overwhelmingly positive, and fans frequently compliment her on the quality of her cosmetic procedures.

But that was not the case with JWoww’s latest post.

Back in March, Farley got engaged to Zack Carpinello, and the lovebirds have been basking in pre-wedded bliss ever since.

So maybe Jenni is just trying out different looks ahead of her wedding (whenever that might be).

Or maybe the pressure to look young for her 26-year-old fiance (yes, the nickname “24” no longer applies — but feel free to keep using it) has led Jenni to take more extreme measures than usual.

Whatever the case, fans were quick to notice that Jenni seems to be sporting a new face these days.

“Couldn’t choose which pic I loved more so I am posting both… living our best life at @hardrockhcac KURO,” she captioned the pic.

While we’re sure the meal was excellent, commenters were far more interested in JWoww’s latest look.

“I still don’t understand your new face,” one person wrote, according to UK tabloid The Sun.

“You’ve had so much work you don’t even look like you anymore,” another chimed in.

“What the heck did you do to your beautiful face & body,” a third asked.

A fourth person offered an unsolicited observation that Jenni has probably been hearing for about a decade at this point.

“Fame went to your head!” this person unhelpfully offered.

For many, the pics brought to mind an earlier post in which Jenni used a face-tuning app as a filter, and then encouraged her followers to show their true, natural selves in their pics.

“Laying here bored and saw this app… so I said ‘why not?’ WTF. I’d rather be old and ugly,” Farley captioned the side-by-side photos.

“But seriously, don’t do this crap to your pics… love yourself.”

In that case, too, fans were quick to take issue with Jenni’s post.

“True love, but you have endless money for the medspa and injections,” one person wrote.

“Many of your followers don’t…It makes a difference in the #nofilter pics.”

That person obviously has a point — but it’s worth noting that Jenni still insists she’s never had any work done on her face.

Yes, she admits to getting breast implants and receiving various injections and filters to smooth her skin and plump her lips.

But the 35-year-old says she’s never undergone any sort of “invasive” procedure above the neck.

We probably don’t need to tell you that fans are having a hard time buying that explanation.

But hey, the important thing is that Jenni is healthy, and she seems wildly happy in her relationship.

And if there’s anyone in the Shore family who can brush off a few mean comments from instagram haters, it’s Jenni.

The woman got over Carpinello groping Angelina Pivarnick in like a week — she’s got a thick skin on her!