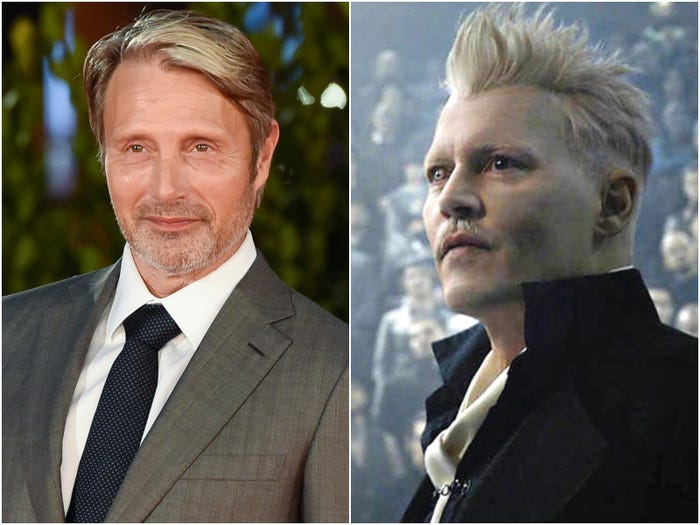 Depp played the dark wizard in the first two instalments of J.K. Rowling's series, including "The Crimes of Grindelwald" but was recently asked to resign from the role following the unsuccessful result of his libel trial against The Sun newspaper.

Mikkelson was quickly rumored to replace Depp, but the Danish actor said that he hadn't been contacted at all about the role and was "waiting for that phone call."

That phone call must have come soon after, because his casting has now been made official.

Mikkelson is best known for another villainous role in a mainstream mega-franchise, as he played James Bond villain Le Chiffre in Daniel Craig's first Bond movie, "Casino Royale." He also appeared as the villainous Kaecilius in "Doctor Strange," and played Hannibal Lecter in the TK television series.

Mikkelson's first appearance as Grindelwald will be in the third movie, in which Depp had only shot one scene according to Variety, so reshoots will be at a minimum.

Depp was suing The Sun for labelling him as a "wife beater" in an article in relation to his marriage with Amber Heard, from whom he is now divorced. Heard, The Sun's star witness, alleged that Depp physically abused her. Depp denied the allegations.

However, Judge Andrew Nicol came to the conclusion that Depp's lawsuit could not succeed because The Sun's lawyers had proved what the newspaper reported was "substantially true." Depp was also recently denied an appeal, too.

Following the trial, Depp posted to Instagram revealing he had been asked to resign from the role of Grindelwald by Warner Bros, and that he would accept the request.

Mikkelson will join costars Eddie Redmayne, who plays Newt Scamander, and Jude Law, who plays a younger incarnation of Albus Dumbledore. The movie is scheduled for release in Summer 2022.