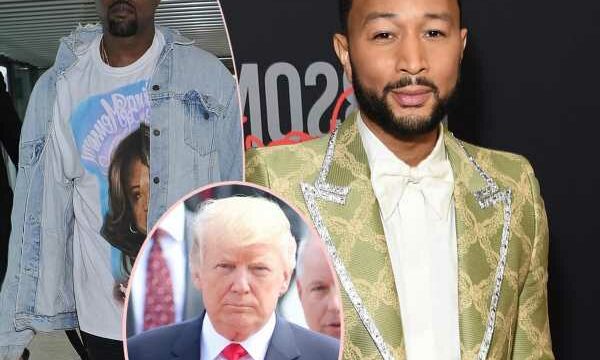 John Legend is finally spilling the tea about the demise of his friendship with Kanye West!

As Perezcious readers may know, Kanye and John had been pals for decades. The Yeezy designer even played a huge role in launching the singer’s career, signing him to his G.O.O.D. Music label and serving as the executive producer of his 2004 debut album Get Lifted. They have collaborated on a ton of projects since then.

However, their friendship seemingly fractured after Ye publicly supported Donald Trump throughout his presidency. This, of course, did not sit well for John, who was very outspoken against the ex-POTUS — understandable given the 76-year-old’s racism, backward views, and many alleged crimes. John even called out Kanye, asking him to reconsider his support. Kanye was not exactly receptive to the message — and thus began the deterioration of their relationship.

For a while, John never confessed that the real reason they cut ties was due to Kanye’s support of Trump and claimed they simply grew apart and were “doing our own thing.” That was always pretty hard to believe given the timing! And sure enough last year Ye finally spilled on the Drink Champs podcast that he did not “rock with” John (or Big Sean) anymore specifically due to their political affiliations.

Now, John has confirmed that the old friends’ differences in politics ultimately “became too much” for them to maintain a relationship. He opened up to CNN’s David Axelrod during an appearance on The Axe Files podcast on Thursday, revealing it wasn’t even totally about Trump. He explained:

“We aren’t friends as much as we used to be. I honestly think because we publicly disagreed on his running for office, his supporting Trump. I think it became too much for us to sustain our friendship.”

Ah yes, Kanye’s own run for president. How could we forget? Oh right, because he barely put any effort into the transparent attempt by GOP operatives to siphon off the Black vote from Joe Biden.

Specifically, the All of Me crooner noted that he believes Kanye’s presidential “campaign” in 2020 — and specifically John’s refusal to stand by his side during this process — was what really drove the wedge between them once and for all:

“He was upset that I didn’t support his run for presidency of the United States of America — for understandable reasons. I wasn’t alone in that, but, you know, he was not happy about that. And we really haven’t been close since then.”

We cannot say we’re surprised! As usual with Kanye, it’s all about Kanye.

John didn’t bad-mouth his former friend on the show, not exactly — though he did put to rest any theories the rapper had secret motives or was playing “4D chess.” Instead, he explained the Jesus Walks artist is actually exactly what you think he is:

“I think he’s been very open with who he is and his struggles with mental health… he’s very real, honestly. So I think there’s not a lot about him that people don’t get. He’s been pretty upfront with his opinions, his struggles, all the things that he’s dealing with. And I think what you see with him is pretty much what you get.”

As for whether or not we’ll see John going into politics anytime soon? No way! He told the podcast host that he has absolutely no desire to go into office and just wants to make a difference through music and charitable efforts:

“I do not want to run for office. I definitely don’t want to do it now, and I don’t envision myself wanting to do it in the future. I feel like I’m able to make a big impact through the work that I’m doing, and I like the way that I’m doing it.”

Considering he is about to become busy with a new baby soon, we doubt he’d have time to take on another project!

Reactions, Perezcious readers? Sound OFF in the comments (below).