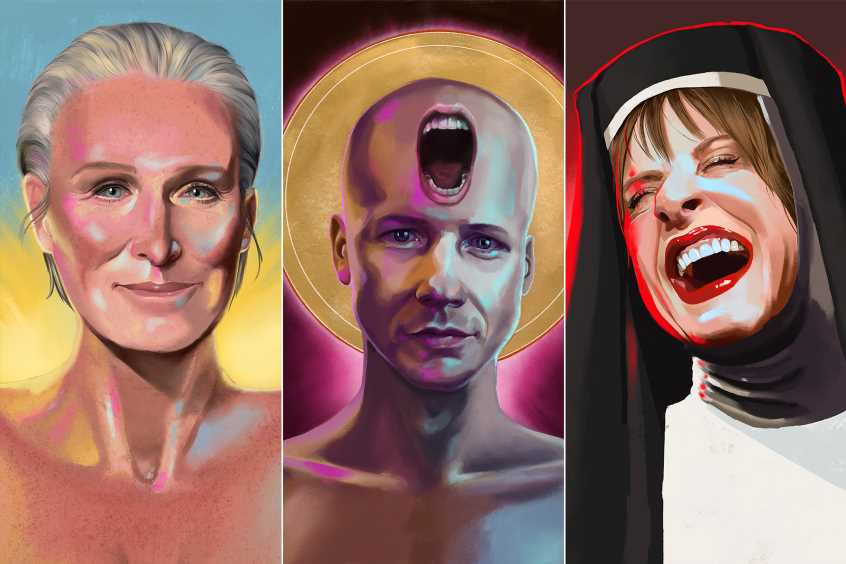 To describe Anthem: Homunculus as a “podcast musical” really doesn’t begin to do it justice. In reality, it’s an unclassifiable omnibus of theater, music and strange narratives written by John Cameron Mitchell and Bryan Weller that translates to over six hours of storytelling packaged in 10 episodes, with 31 songs that span everything from indie-pop ballads and avant-garde noise to bebop and heavy metal. It encompasses: a love ballad from a brain tumor; a dead brother who’s now a gay gym rat living on his own planet; and a gender-nonconforming lover named America who doses ayahuasca while at Beat author William Burroughs’ Kansas house to unlock new dimensions. But even more astounding than the storyline is that the 40 performers include legendary stage and screen actresses Glenn Close and Patti LuPone, along with Cynthia Erivo, Marion Cotillard, Denis O’Hare and Laurie Anderson (as that tumor), all participating in this hallucinogenic masterpiece.

When I speak to Mitchell and Close, it’s the day after the podcast premiered on Luminary, and they’re throbbing with excitement for this experiment in storytelling. We’re tucked into an 18th-floor corner conference room at  Topic Studios’ Union Square office — accompanied by Pip, Close’s Havanese pooch — to try to unspool what this project means.

“I think of it as kind of radio cinema,” Mitchell explains. “Play implies a smaller space and audience. With this, we have a density that’s not usually heard.”

“I kind of felt like we’re on the edge of a new art form in a way,” Close says. She especially enjoyed the new format due to its lack of limitations, which also meant she could record in her slippers with her dog by her side, and no need for makeup or costumes. “It turned out to be one of the most creative ways to make something. I was in the studio, John was in the soundproof box on a mic directing me and we just kind of riffed. It was so fantastic!”

“There was great flexibilities,” Mitchell adds. “Glenn would be in Montana and I’m like, ‘I need you to tell me to fuck off; could you put a towel over your head and record yourself in your iPhone and text it to me?’ She’s like, ‘No problem. How many fucks?’ [both laugh] And then it could go right in. The sound quality was enough that we could make it work.”

It’s clear that Mitchell wasn’t going to be content with something as straightforward as a “podcast.” Since he transformed his 1998 Off-Broadway rock musical Hedwig and the Angry — which also warped genres (and genders) — into an indie film, he’s mainly been working in that format, following it with Shortbus; Rabbit Hole (starring Nicole Kidman) and 2017’s How to Talk to Girls at Parties. That’s when he’s not appearing as “horrible gay bosses” in the Hulu series Shrill and The Good Fight.

In many ways, Anthem functions as a completely new creative phase for Mitchell, with very close ties to his Hedwig origin story. For starters, the protagonist Ceann (voiced by Mitchell) lives in Junction City, Kansas. In fact, he resides in the same double-wide trailer where Hedwig once made a home — and “the bathtub still coughs up blond wig hairs,” he notes in the first episode. Ceann creates an online telethon to raise money since he has no health insurance, urging those listening to “help my fucking tumor go viral.”

Mitchell says he never runs out of material, since he’s constantly taking note of all the detritus people spew around him. For Ceann, he’s reconfigured it into a pastiche of campy witticisms, with plenty of droll wisdom that sounds like it could have spilled from Hedwig’s lips, including that, since Kansas now allows medical marijuana and assisted suicide, we live in a “palliative democracy” and rather than everyone being famous for 15 minutes, as Warhol stated, people will aspire to be anonymous for 15 minutes as we “fetishize the past and over-curate the present.” Mitchell even included a few one-liners that he tried out during the Tony-winning Broadway revival of Hedwig, such as “I’ve been disasterbating for days” and “I finally hit my bottom. He hit me back.”

Along with the highly stylized fictional storyline, however, there’s quite a bit of Mitchell’s own heartache — the death of his younger brother, his longtime partner and his father, as well as his mother’s Alzheimer’s disease — which he sees as a natural progression for him creatively.

“You know, death concentrates the mind. Glenn and I have talked about how your first work is about, ‘Who am I?’ I am your actor; you like parts of me I haven’t expressed and it’s a safe way to express them. And then you get older, and it’s not so much about, ‘I have to prove who I am’ or figure out, ‘Why I am.’ It’s: ‘What do I do with the time left?’ I’ve freed myself, hopefully, from those things that controlled me or limited me… So this is the second-half of my life thing. This character is facing death, as we all are. But in a more direct way, his life is flashing before his eyes. So I’m investigating my relationship with my mom, that Glen plays, who is a difficult and brilliant woman.”

That’s another reason he cast Close as a version of his cranky mother with Alzheimer’s — who feels under-appreciated and gets nailed to a cross (literally) by the end of the series.

“My mom wasn’t a good maternal figure; she didn’t touch us,” he says, before launching into a Scottish accent as his mother. “‘I never saw a banana ‘til I was 12! I grew up during a real war. You think we had time to touch?’ That’s my mother. I kept trying to get that line into various things and finally I got Glenn to say it.”

Playing a role that represents Mitchell’s mother may have caused others anxiety but Close felt no trepidation taking on the role — even though her final number is a heavy metal jam that was completely outside her comfort zone.

“First of all, I went into it not really deeply analyzing what I was getting into. I’m always up for something different, and I just I just thought it was incredibly smart and witty and moving. … For my own creative health, [I want] to walk on the edge and some some projects are closer to the edge than others. But I think John is very much on the edge.”

Mitchell seems navigating that liminal space, as long as he has others to bring along for the ride. “It’s my autobiography,” he says, “With friends helping because it’s less lonely.”

The soundtrack for Anthem: Homunculus is available for streaming and download on May 20th. Here John Cameron Mitchell sing “The End of Love” below.