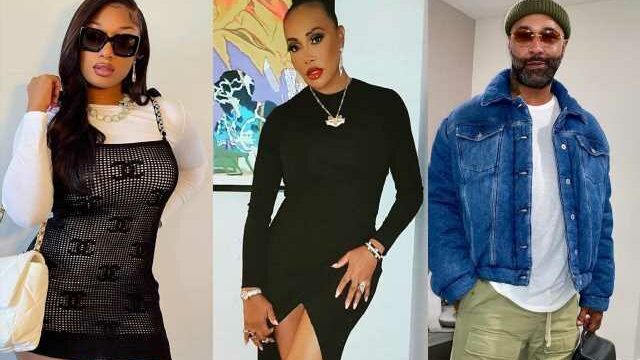 The media personality turns to his social media platform with a cryptic post after being slammed by the ‘Sharknado 2’ actress for dissing the Hot Girl Meg.

AceShowbiz –Joe Budden seemingly has something to say. The media personality turned to his social media account to subtly react to Vivica A. Fox‘s criticism over his Megan Thee Stallion remarks.

On Tuesday, December 20, the “Joe Budden Podcast” host made use of his Twitter account to let his fans and followers know his thoughts about Vivica’s comments. “Lol,” he simply wrote along with an angel emoji, laughing off what the 58-year-old actress had said.

Joe Budden appeared to react to Vivica A. Fox’s criticism over his Megan Thee Stallion comments.

Vivica ripped Joe, who dissed Megan amid the ongoing trial against Tory Lanez over the July 2020 shooting incident, in the latest episode of FOX Soul’s “Cocktails with Queens“. The “Sharknado 2: The Second One” actress responded to Joe’s comments as saying, “Joe Budden, if you don’t button it up and sit yo b***h a** down.”

She continued defending Megan, “Hatin’ on that girl. Okay, y’all mad ’cause girls right now is ruling Rap. It’s just driving y’all crazy that the sistas is just ruling and taking numbers and can tell y’all about y’allself.”

“It’s a new day! But if you wanted some attention, to be honest with you, I think that’s the wrong one to try and get it from because it’s really coming out,” Vivica continued. “Facts are finally coming out after so many years of this trial being long-awaited that she was shot. Get used to it, brother. It’s a new day.”

As for Joe, he made his initial comments in episode 586 of his “Joe Budden Podcast”. In the December 15 episode featuring DJ Akademiks, he discussed Megan and Tory’s ongoing court case and at one point, he confessed his disdain as saying, “I got some theories. But what I can say is I’m finished with these n***as and I don’t like that girl. I can’t.”

“Personally, I’ve seen this woman do horrible things to some really great people that I have longstanding relationship with here in this industry,” he continued. “So I’m biased. You can’t just treat my friends, and people I f**k with, and people I’ve seen in this game for 15 years a certain way.”

The trial over the shooting incident involving Megan and Tory finally began on Monday, December 12 following numerous delays. Tory, who pleaded not guilty, has been charged with discharging a firearm with gross negligence, in addition to an assault with a semiautomatic firearm and carrying an unregistered firearm in a vehicle charge. If convicted, Tory will spend nearly 23 years behind bars as well as subsequent deportation to Canada.