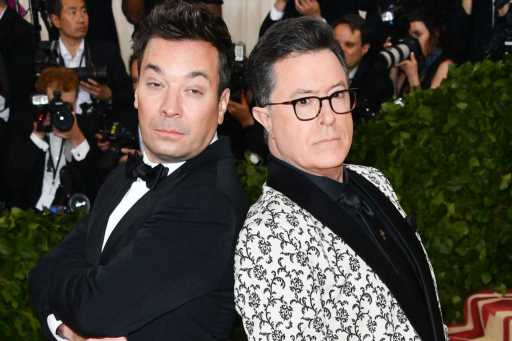 The Tonight Show host’s gig may be in danger amid being beaten in the ratings by rival talk show host Stephen Colbert, according to a new Page Six report.

On Wednesday, May 22, Nielsen data showed that CBS’ The Late Show With Stephen Colbert had rated higher than both The Tonight Show and ABC’s Jimmy Kimmel Live! for the third year in a row.

And in a first, Colbert, 55, topped Fallon, 44, in the ratings for every single broadcast of the season!

Fallon’s recent failure is making people wonder whether he will stay in the high-stakes late-night spot much longer, according to Page Six sources.

Despite bringing in NBC Today show titan Jim Bell seven months ago to improve The Tonight Show, ratings have not improved.

Current showrunner Jim Bell reportedly has argued with executive producer Lorne Michaels, the SNL legend whom he believes is “stuck in the past.”

A source previously told Radar that Fallon “is feeling the pressure. I mean, Stephen Colbert is now beating him in a big way and he has to change his format to keep up because he’s losing viewers.”

Fallon was once riding high but as RadarOnline.com reported, the funnyman raised eyebrows in 2015 after he suffered a series of disturbing incidents, including nearly severing his ring finger after tripping in his kitchen, chipping a tooth trying to open up a bottle of medicine two months later, and suffering a cut from a bottle of Jägermeister that October.

In the fall of 2016, Fallon was caught looking “very drunk” while dancing at a punk bar, a source said.

Fallon’s alleged drinking became so concerning, insiders told Radar at the time, that NBC execs told him to cut back on the boozing.