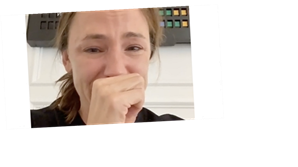 Like many of us, Jennifer Garner has been spending her quarantine time catching up on TV.

And, like many of us, she's discovered the joy of The Office — and the devastation that comes with finishing a show you love.

On Monday, the actress shared a "farewell testimonial" video of herself after finishing the series, which she said she accidentally filmed in slow-motion. And, well, the slow-motion tears are honestly a quarantine mood.

"My kids and I have spent months piled on the couch working our way through 'How to Behave as Grownups,' aka #TheOffice," she wrote. "Apparently we are sensitive people—the finale hit us pretty hard. When I realized I’d accidentally shot my farewell testimonial in slo-mo I realized: your Monday might need this, too."

"You'll never guess which show my kids and I watched an episode a day of through quarantine and guess what? We finished it, and guess what? It gave me some really big feelings." she narrated in the video. "Look who needed a big cry and maybe a shower would have been helpful, but it's just nice to know you can still just feel so passionate about something, right? So thank you. If you've ever heard of the show, The Office, you should try it. It's wonderful."

The video earned her some encouraging comments from Office castmembers like Angela Kinsey and Jenna Fischer.

"Omg!! @jennifer.garner I am only just seeing this (we had no air conditioning for the day so long story short but I’m only just catching up on things)!! I love this," wrote Kinsey, who plays Angela Martin on the show. "I love you and your family and just so you know the finale makes me bawl my eyes out too!"

Fischer, who played Pam Beesly, wrote, "Oh Lady!! This is the sweetest and most wonderful post!! Sending you lots of love and if you want to start over @angelakinsey and I are re-watching for the podcast. We are in the middle of Season 3 and have major feelings about lots of moments (Art Show, Dwight comforting Pam…)"

Mindy Kaling, who wrote for the series and played Kelly Kapoor, responded with a single red heart emoji.

Maybe Garner can be included in the next cast reunion?