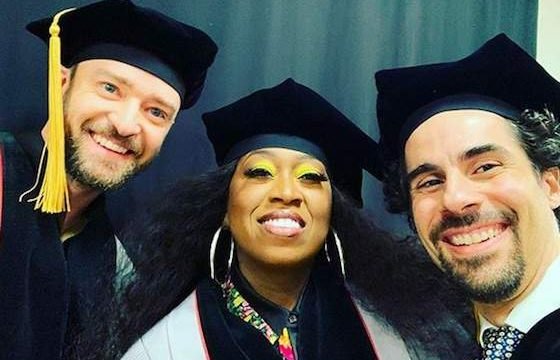 Don’t worry, you won’t ever find yourself wheeled into an emergency room and see Missy Elliott standing over you in head to toe Adidas scrubs, informing the closest triage nurse that she needs a team to assist her while she puts her thing down, flip it, and reverse it. Not that kind of doctor. It’s the honorary doctorate club, which Missy and Justin Timberlake are now members of.

Rolling Stone says that Missy and JT (along with Hamilton and Dear Evan Hansen musical director Alex Lacamoire) were awarded honorary doctorate degrees on Saturday from the Berklee College of Music in Boston. Berklee released a statement announcing the news, explaining that Missy, Justin, and Alex were “being recognized for their achievements and influences in music, and for their enduring global impact.” Obviously Missy and Justin are very proud of the diplomas that I assume will be placed in their special moments room, next to her inflatable supa dupa fly suit and his fully-poseable Trolls doll, respectively.

No Dream is too big!!! Keep chasing!!! Trust me… I’m a DOCTOR!! ??‍? But, for real… THANK YOU to @berkleecollege for this incredible honor—I’m very humbled and grateful.

Both Missy and Justin also delivered commencement speeches to the 2019 graduating class. I graduated from art college, and I felt a little stiffed when the honorary doctorate recipient took the stage to talk about his trash can. If I got my degree from four years of frantically hot gluing shit together the night before it was due, then the honorary doctorates should too! But I guess they already put in the work in other ways. Missy recognized the graduates hard work, touched on her own hard work, and stressed how important it is to never give up. Then that little b-girl in the pink track suit and pigtails two-stepped onto the stage and moved Missy’s graduation cap tassel from the right to the left side. That didn’t happen, but I wish it did.

Justin Timberlake (who was joined by Jessica Biel), was understated and subtle in his message. Sorry, I misspoke; I meant to say he gave you exactly what you’d think Justin Timberlake getting a doctor title would be like. He gave a shout out to his wife, to his mom, to his best friend Trace. Then he got emotional and extra about it all. That’s fine, but if Doctor Justin Timberlake needs to bring himself back down to earth, he could remind himself that that title makes him sound like a surgeon on the second-most popular daytime TV soap opera set in a country hospital (possible title: Cold Crick General).

Justin ended his speech by telling the graduating class that he looks forward to working with them in the future and seeing them in the studio. They should take him up on that offer! Jobs for recent college grads are scarce, and I bet Justin pays good money to whoever’s job it is to forward Joey Fatone’s calls to voicemail.