Out of the many points of intrigue that hooked viewers in the 2020 Netflix hit docuseries “Tiger King: Murder, Mayhem and Madness,” one was feasibly the highly unconventional and unorthodox love life Joe “Exotic” Maldonado-Passage. A queer gun-enthusiast, former political candidate, and zoo-owner with a bleach-blonde mullet, Joe had, at one point, entered into a three-way ceremonial marriage with his longtime partner, John Finlay, and Travis Maldonado, a young employee at his GW Zoo who tragically died in an accident involving a revolver in 2017 at the age of 23. Though Finlay left Exotic before his conviction and subsequent 22-year prison sentence for the attempted murder-for-hire of his rival, Big Cat Rescue founder Carole Baskin, he managed to date and later marry yet another husband, Dillon Passage.

Unfortunately for Exotic, however, Passage reportedly filed for divorce in May, which he announced on his personal Instagram, informing followers that despite their decision to part ways, he and Exotic are still on “good terms.” And while many have since questioned the ethics of Exotic’s past romantic pursuits, with media outlets and LGBTQ publications having accused the unlikely convicted felon-turned-celebrity of grooming and coercing Maldonado and Finlay into a relationship, it seems that Exotic has remained undaunted. In fact, Exotic’s latest foray into the dating pool is causing quite the splash. 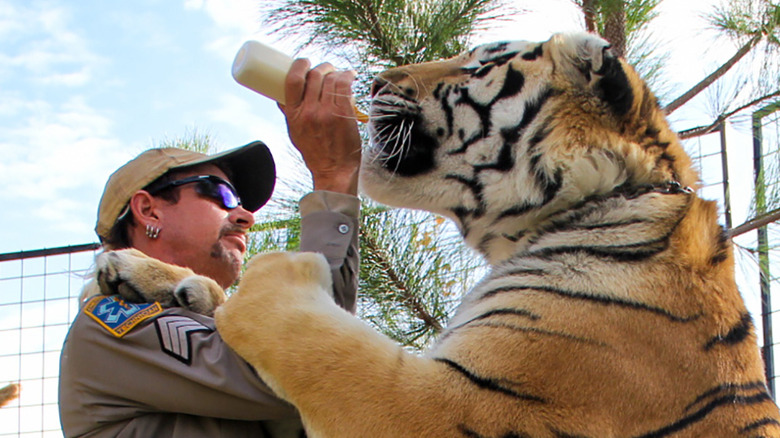 According to KTUL News Channel 8, an official press statement posted on Joe Exotic’s website announced that not only do Exotic’s attorneys believe the convicted would-be mastermind (behind the failed murder-for-hire of Carole Baskin) has a good chance of being released from prison, but that he has also created a contest in the vein of the popular reality show “The Bachelor” in order to find his next husband.

In the statement, Exotic’s legal team is allegedly “confident” in arguing for Exotic’s conviction to be overturned, due to what the release claimed was “new evidence that has been obtained proving conspiracy, obstruction of justice, perjury by federal agents, and witnesses.” Though it is unclear as to the details of the supposed, aforementioned evidence, the statement later focused on Exotic’s plans for finding love — that is, if anything comes from the claims of his legal team.

The contest, which is apparently now open and titled “The Bachelor King,” is eligible for entrants who are male and over 18 years old, and can be entered by way of an online application. Per the announcement, “the top [three] picks will receive a 3-night, 4-day all-exclusive paid romantic get away with Joe Exotic once he has been released,” which Exotic expects will be by the end of this year. Anyone care to apply?