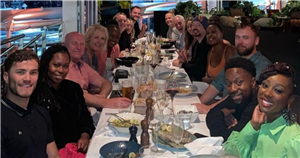 I’m A Celebrity… Get Me Out Of Here! is coming to an end and the evicted campmates are enjoying their last few days in Australia before heading home.

Most of the runners up gathered for a boozy dinner ahead of the final, with evidence of their antics documented across social media.

Charlene White, who was the first to leave the jungle, took to her Instagram to share snaps with fans of the former campmates – as well as plenty of family and friends – enjoying a meal in a restaurant overlooking a harbour.

There are plenty of empty champagne flutes visible in the shot, as well as some blue and gold balloons. After the dinner, the group gathered for a selfie in a lift, with pop legend Boy George grinning and throwing up a “peace sign” for the shot.

In the caption, Charlene wrote: “This lot though… couldn’t have done it without them. The @imacelebrity camp mates who jungle together, celebrate together (and take ridiculous life selfies together)… alongside family and friends.”

Charlene finished the post by writing, “Not long till this Oz adventure finally comes to end.”

Most of the celebs did make the dinner though, with Scarlette Douglas, Babatunde Aléshé, Chris Moyles, Sue Cleaver and Boy George all making appearances.

Mike Tindall, a former rugby world cup winner and the camp’s most recent evictee, was nowhere to be seen but has posted several snaps of his time recuperating from the jungle with his Equestrian star wife Zara, who is the daughter of Princess Anne.

Other family and friends in attendance at the boozy meet-up included Chris Moyles’ girlfriend Tiffany Austin and Babatunde’s sister Funke. Owen Warner is still in camp, but his brothers have clearly befriended plenty of the evicted campmates and attended the dinner in his stead.

Alongside the Hollyoaks star in the final is West Suffolk MP and Former Health Secretary Matt Hancock and Lioness Jill Scott MBE.

The show will finally come to an end on 27 November, when one of the three remaining stars will be declared King or Queen of the jungle.