FARMINGTON, NM — Three weeks ago, city police and San Juan County sheriff’s deputies got a tip about a man moving a truckload of marijuana into a budget motel on the west side of town. When they began knocking on doors at the Travel Inn on October 8th, they could hardly believe their eyes: numerous rooms had been converted into a makeshift assembly line for processing cannabis. Officers waded knee-deep through piles of buds, and discovered 17 Chinese men and women hard at work pruning the plants.

Police seized 2,000 pounds of suspected marijuana, with an estimated street value of $2.8 million. It was the biggest marijuana bust ever made in San Juan County, according to Sheriff Shane Ferrari.

“What we found in there was only a fraction, maybe 25 percent of what they’re growing in a single greenhouse on the reservation,” he told Searchlight New Mexico.

If investigators determine that figure is accurate, it could mean the Shiprock, New Mexico farms are capable of growing thousands of tons of illegal marijuana, potentially worth billions of dollars.

First, It Was Weed — Now, Voters Have a Chance for Legal Psychedelics

Over the past year, local Navajo farm board president Dineh Benally has overseen the creation of a vast network of industrial-scale black-market cannabis farms that now stretch across the Shiprock Chapter. Over 1,000 workers from predominantly Chinese neighborhoods in Los Angeles and New York have arrived on the reservation to manage and work the farms.

Hundreds of cannabis greenhouses have been built atop 36 farms traditionally dedicated to corn, a food staple that is central to Navajo ceremonies. Transformation of the land has created simmering resentments across the community.

As of October 20th, Navajo Nation Police have made 38 arrests, issued nearly 300 citations and seized what Chief Phillip Francisco described as “thousands of pounds of marijuana” — a quantity so vast that the police department has run out of storage space in its evidence lockers.

A Navajo court issued a temporary restraining order on September 18th, ordering the closure of the farms, and on October 28th the tribal government filed a lawsuit against 33 Navajo farmers who had leased their land to cannabis growers. Still, five farms remain in operation, Francisco said, and a steady stream of workers continues to process the plants.

One of those workers was Qinliang Wang, who arrived in New Mexico last month eager to begin a job “trimming flowers.” Wang was among those arrested at the Travel Inn three weeks ago. 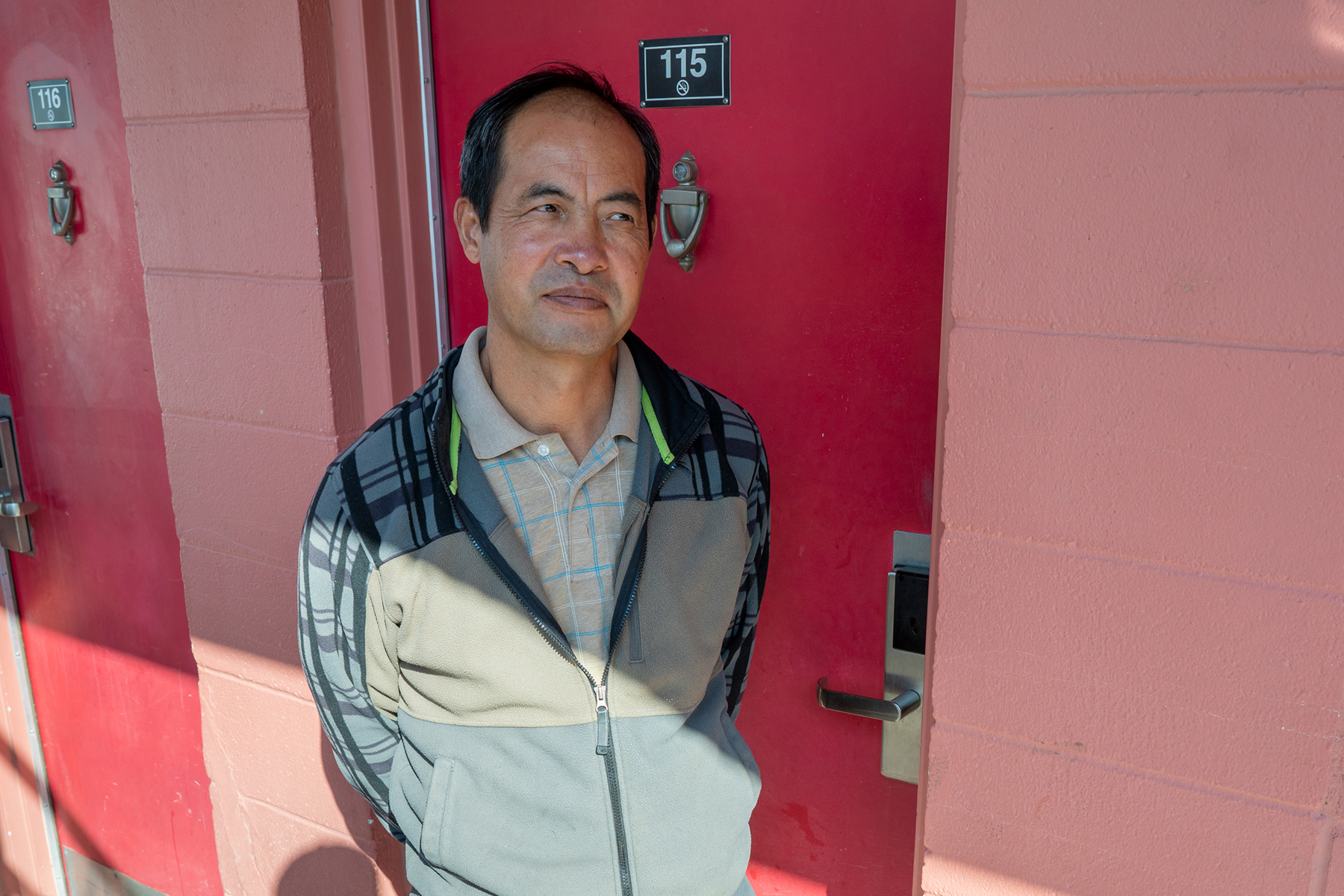 Qinliang Wang in front of his room at a motel in Farmington, where he came to do what he thought was legal “flower trimming” after being out of the workforce since March. Two days later, he was arrested in the room while pruning marijuana.

“I lost my job in California because of the pandemic back in March,” he told Searchlight in Mandarin, two days before his arrest. “My ancestors have been farmers for generations. When a friend told me about this work opportunity, I thought it would be perfect. Nobody told me it was illegal. Nobody told any of us workers it was illegal.”

Wang, a former restaurant worker in California, moved to the U.S. from China’s Hubei Province in 2014. Like many of the 1,000 or so Chinese laborers who came to New Mexico this year, he learned about the work opportunity through a friend. Other workers were recruited through “job agencies” in East Los Angeles and Queens, New York. Labor advocates say that these agencies are common in Chinese immigrant communities and often serve to entrap workers in exploitative jobs.

Wang said he didn’t learn that the farms had been declared illegal until after his arrival in New Mexico.

Wang and his 16 coworkers were booked into the San Juan County Adult Detention Center and have since been released. They face multiple felony drug-trafficking and conspiracy charges, carrying the possibility of more than a decade in prison, according to attorney Sarah Field of the New Mexico Public Defender’s Office. As of October 27th, Wang had not met with an attorney. He said he did not understand the charges that have been filed against him.

“These clients are at a disadvantage because they don’t have the luxury of being able to talk to us about their case,” Field said, adding that the Public Defender’s Office will represent only one of the 17 workers. The rest of them will be represented by private attorneys. 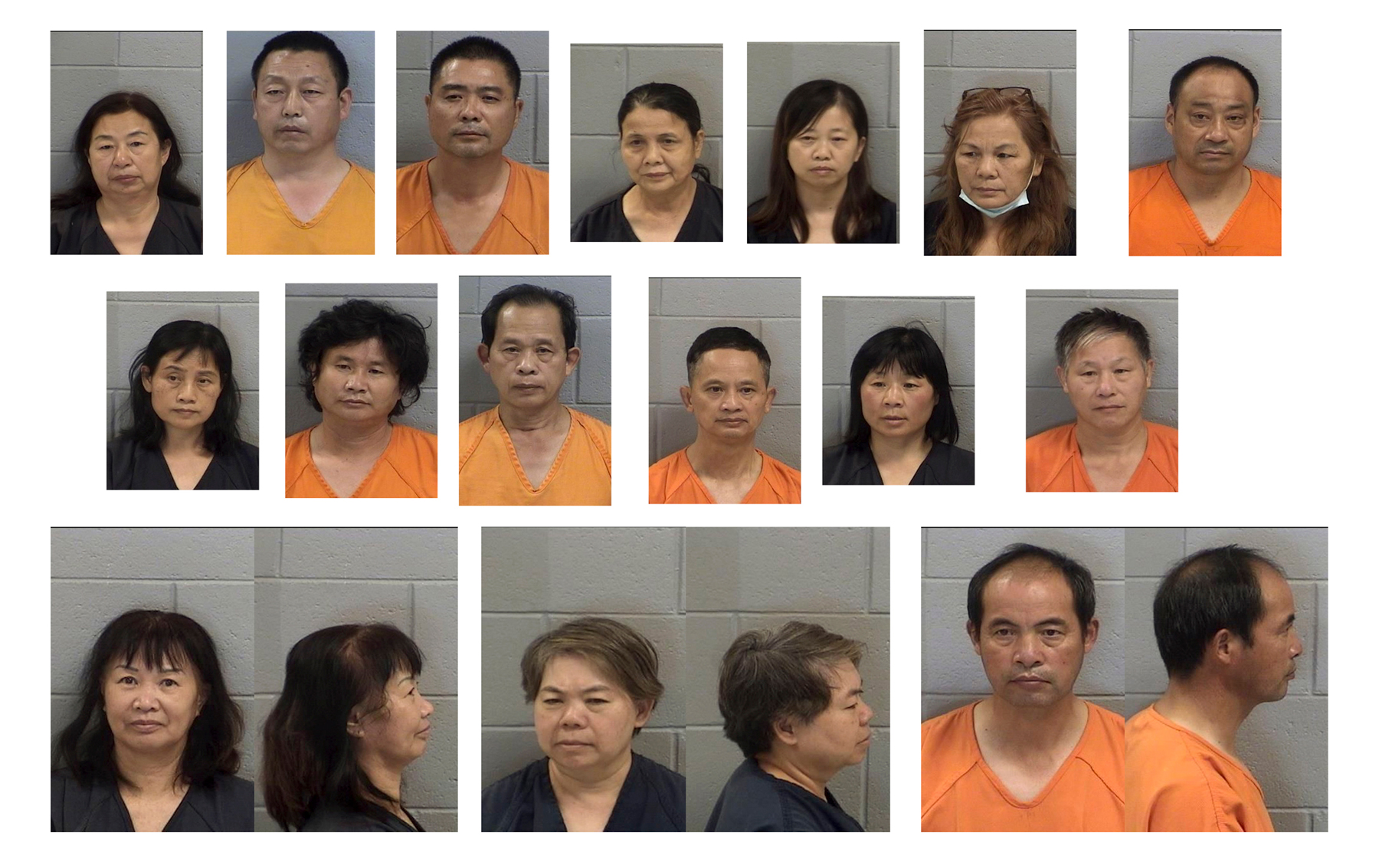 Mug shots of sixteen of the laborers detained at the San Juan County Adult Detention Center.

“Our hands are really tied” without a Mandarin interpreter, which the office has yet to find, Field added.

Documents and contracts obtained by Searchlight show that the project’s organizers deceptively presented the farms as legal ventures, enticing low-income residents of predominantly Chinese immigrant neighborhoods in Southern California to join up as laborers or investors. Some of the investors said that they mortgaged their homes, cashed in their retirement accounts or borrowed from loan sharks on the promise of high returns.

One investor, who identified himself only as “Mr. Zhang,” told Searchlight that he poured $220,000 into a small plot of cannabis farmland in Shiprock, compromising his life savings and listing his house in Los Angeles as collateral on high-interest loans.

“We are not rich people,” Zhang said in Mandarin, speaking from the trailer he shared with six other farmworkers. He left his wife and two young children back in California, with the promise that he would return with money for the family. Now, their savings gone up in smoke, his wife has left him. 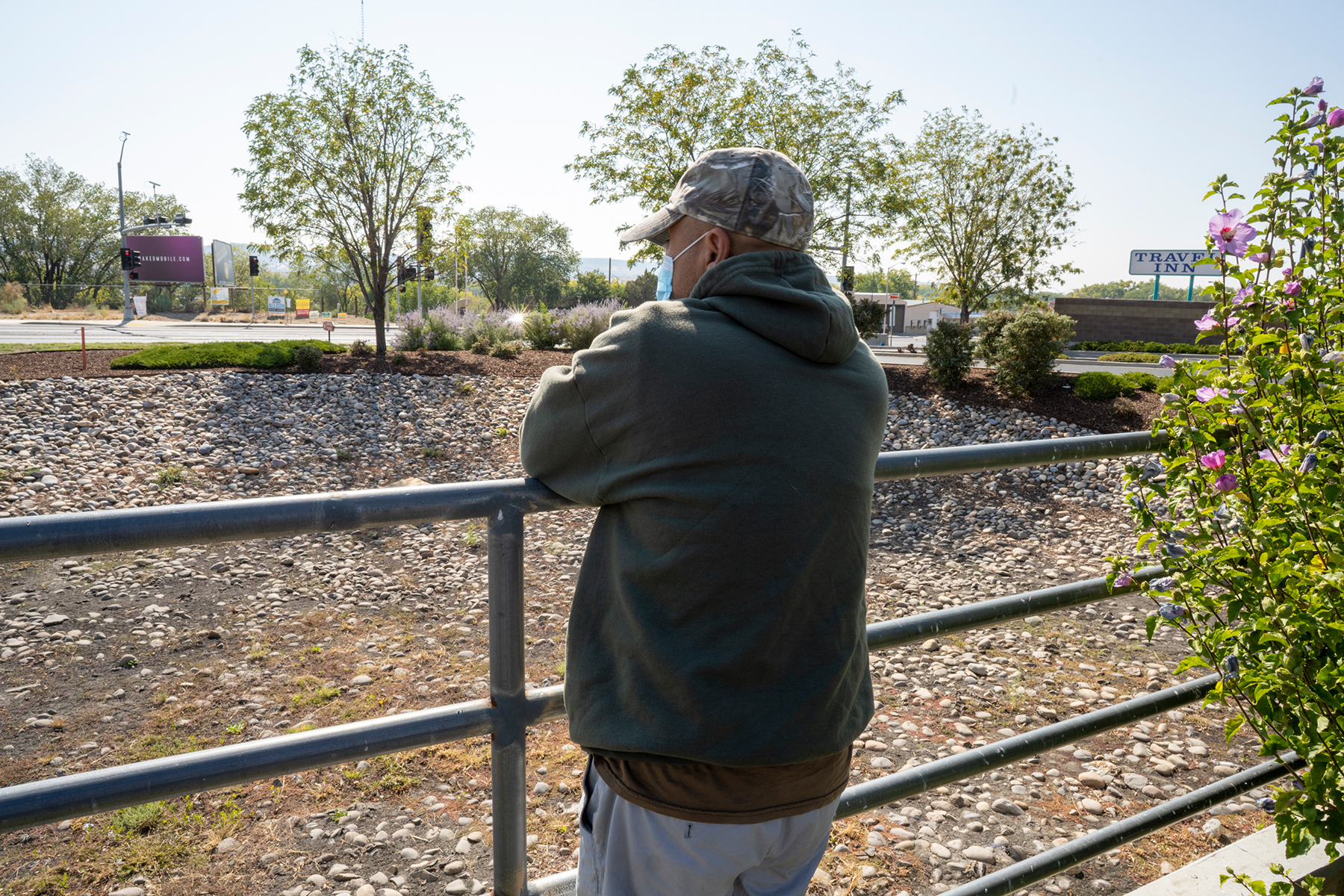 Mr. Zhang, who poured in his life savings into what he thought was a legal cannabis farm, gazes over the fence at a Walmart parking lot in Farmington.

“I am homeless now,” he said, explaining that he only had enough money left to buy one loaf of bread per day from the dollar store. “I haven’t had a bath for eight days. How can I live this way? I don’t have face to meet my friends and relatives. I would kill myself if I only knew how.”

Most of the workers have since returned to California and New York, according to interviews with at least 10 Chinese farm laborers and investors. But hundreds still remain.

Some are stranded in the high desert of New Mexico, left to fend for themselves after their supervisors fled without paying them their wages; others spend their days crowded into a trailer park on the outskirts of Farmington, clinging to the hope that they might still recoup a part of their investment. Still others are hiding out inside the reservation, sleeping in the woods that line the San Juan River, according to local residents. 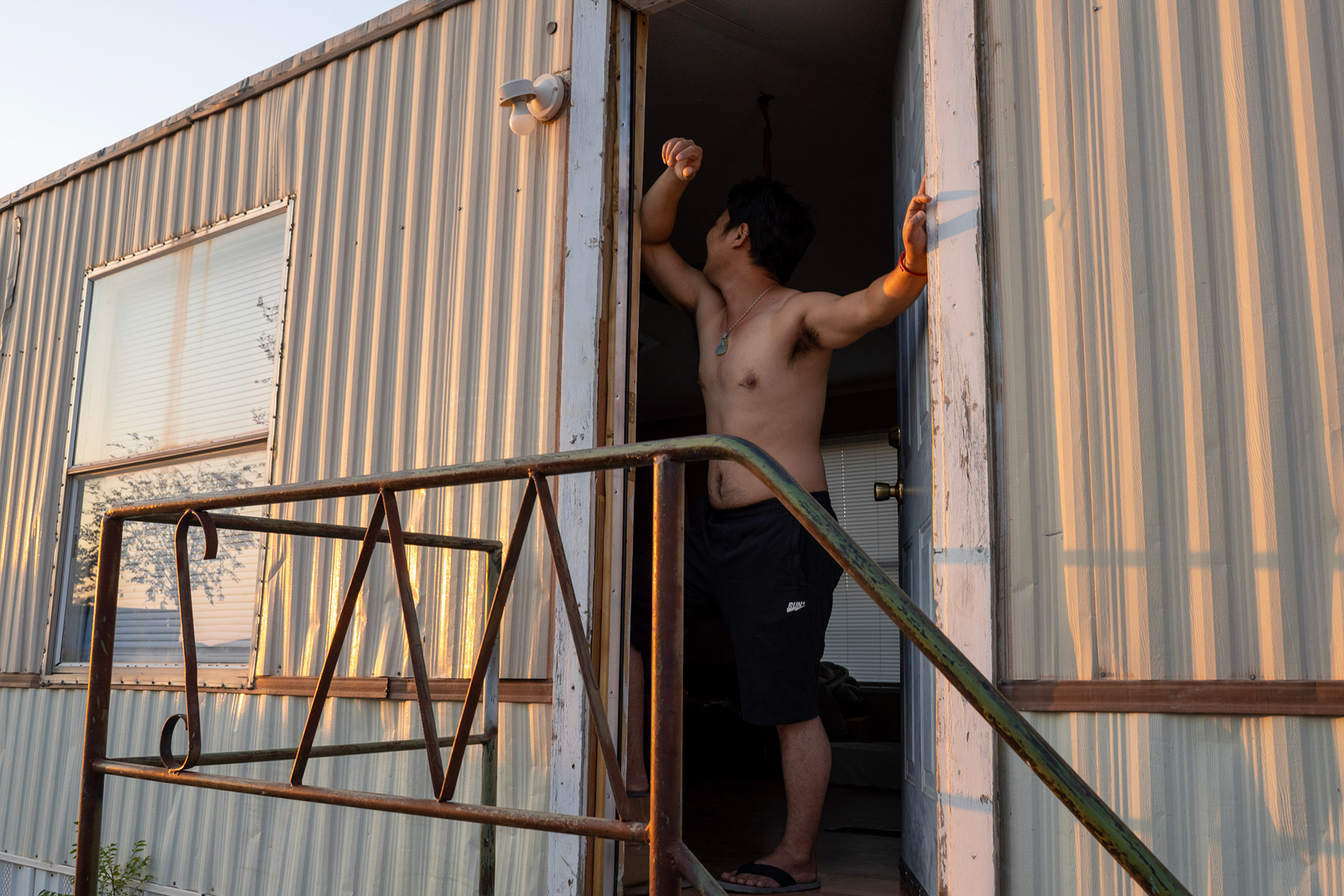 One of many Chinese workers who are now living in a Farmington trailer park, following the Navajo government’s restraining order against the cannabis farms.

“It’s really heartbreaking,” said Sheriff Ferrari. “These workers aren’t drug dealers. I truly think that they’ve been duped. But the people that are responsible for it — I want to make sure these sons of bitches are the ones that go down.”

All the operation’s organizers remain at large — including Dineh Benally, the local Navajo farm board president and principal organizer, who fled the area and is presumed to be in hiding, according to Navajo Nation Police Chief Phillip Francisco. Law enforcement on and off the reservation is currently working to identify the other organizers of the operation.

“The Chinese investors have lost millions or even hundreds of millions of dollars,” said Mike Chen, another worker, who was himself not arrested. “Dineh Benally is a liar and a fraud.”

Irving Lin, who was formally one of Benally’s primary business associates, stated in an October 7th affidavit that Benally told him that “the farming is continuing and will continue” in spite of the court order to stop. Navajo Police said the same thing in a separate affidavit, according to the Navajo Times.

Benally’s attorney, David Jordan, did not respond to requests for comment.

Meanwhile, many of the farms continue to operate. Video obtained by Searchlight shows hydroponic irrigation equipment nourishing lush cannabis plants, and neighbors report that most nights, under the cover of darkness, Chinese workers slip onto the farms and harvest the crops by flashlight.

Navajo Police set up a hotline for residents to report violations of the restraining order. But without jurisdiction to arrest non-Natives, tribal police have been unable to fully prevent the Chinese workers from continuing to grow and harvest marijuana inside the enormous greenhouses.

Angered by what they perceive as an inadequate response by tribal law enforcement, neighbors and traditional corn farmers have begun patrolling the neighborhoods where the cannabis farms remain active, staking out farms throughout the night and reporting their sightings to tribal police.

“I think the cops are tired of hearing from us,” said Michael Roy, a resident of the village of Cudei, near Shiprock, who patrols the roads near his home on foot, a billy club in his pocket and a camera in his hand. “The police are really not taking this serious enough. We keep reporting to them like they asked us to, but it hasn’t made a difference.”

“Even as we talk right now, they are still harvesting,” said Zachariah Ben, a corn farmer who on a recent night joined a group of Shiprock residents — some carrying baseball bats, tasers and other weapons — outside a cannabis farm where they saw workers harvesting marijuana.

When the group called Navajo Police, an officer instructed the irate crowd to leave.

“It is such a disappointment,” Ben said, explaining that he and other cannabis opponents see the farms as a threat to Navajo sovereignty and culture. “We are the laughingstock of other tribes because we can’t stop this from happening. But as soon as the foreign workers step foot off the reservation, there are sheriffs and police waiting for them.”

Ed Williams has reported on poverty, public health and the environment in the U.S. and Latin America for digital, print and radio media outlets since 2005. He comes to Searchlight New Mexico by way of KUNM Public Radio in Albuquerque, where he worked as a reporter covering public health. 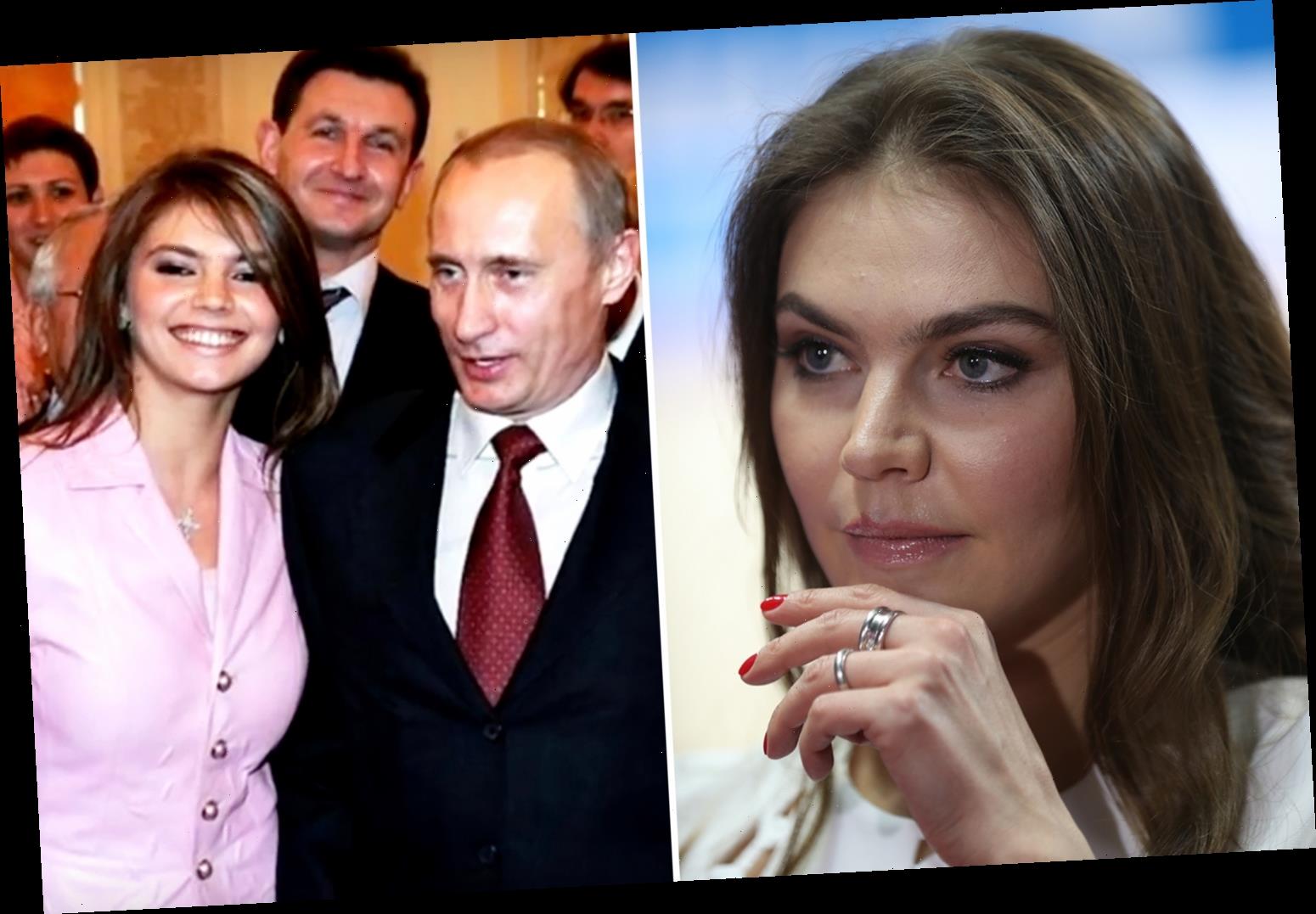