Prince Charles and Prince William share a special bond. Not only are they father and son, but they are also both future kings of the British throne. After Princess Diana died, Charles had to step up his parenting game. See, he and Lady Di had been divorced and were co-parenting at the time of her death. Naturally, after her fatal car crash in 1997, the weight of raising two boys to adulthood rested solely on his shoulders.

Through the years, William was able to turn to his dad for guidance and wisdom, like when he felt pressure to wed Kate Middleton. In “Kate Middleton: Biography,” Chris Anderson wrote, via Daily Star, “And Charles, who was by then very fond of Kate, said ‘it would be unfair to the young lady [to not commit].'” The author claimed that Charles said, “You cannot string her along anymore, so you should just break it off.” William followed his dad’s advice, and as his old man may have privately predicted, it was only a couple of months before they were back together again.

So, it shouldn’t come as a surprise that he also consulted with Charles when he wanted to quit university. Royal biographer Robert Lacey alleges that William was in his freshman year and wanted to leave St. Andrew’s University when Charles reportedly stepped in. Here’s the deal. 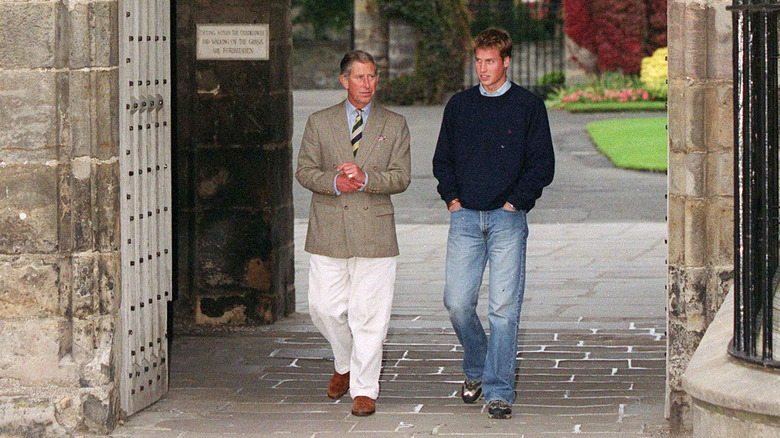 In his book, “Battle of the Brothers,” royal expert Robert Lacey revealed that initially, Prince William was not impressed with life at St. Andrew’s University in Scotland. Per Marie Claire, he struggled with “shopping in the local Tesco” and the attention he received from fellow classmates because he was the heir to the throne. Apparently, by the time Christmas break rolled around, he was ready to either quit university or transfer to another school.

However, before any decisions were made, William and Prince Charles had a heart-to-heart. At the time, Wills was an Art History major and he wasn’t enjoying his course. Charles encouraged his son to switch to Geography instead. Mark Bolland, a royal “spin doctor,” told Lacey that Wills’ reluctance to return was “no different from what many first-year students go through.” He added that after Charles convinced William to give university life another go, they were able to present Wills’ wavering as a “wobble.” Bolland continued, “St Andrews had a flexible course structure and when they heard that William might be happier majoring in geography, they made sure there were no roadblocks.” Problem solved. William graduated with his degree in 2005, per the Daily Mail.

One could even say that if it had not been for Charles’ intervention, William would not have met Kate Middleton. And how lost would he be without the lovely Duchess of Cambridge and their three gorgeous children?