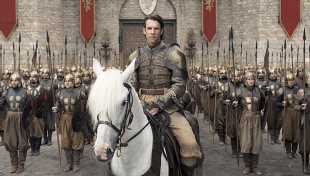 Harry Strickland is one of the new characters in the final season of ‘Game of Thrones.’ He’s going to be a key player in the fight between Cersei and Daenerys in the battle for the Iron Throne.

Harry Strickland made his first appearance in the Game of Thrones season 8 premiere alongside Cersei Lannister and Euron Greyjoy. He’s the captain of the Golden Company, a mercenary group from Essos that Cersei hired to help her fight her enemies and keep the Iron Throne. She took out a loan from the Iron Bank to pay for the Golden Company at the end of season 7. She sent Euron to bring Harry and the Golden Company to King’s Landing from Essos.

When he arrived, Harry Strickland had brought Cersei 20,000 men, 2,000 horses, but no war elephants, which Cersei was upset about. She really wanted those elephants. The Golden Company is known for never breaking a contract. Their motto is simple: “Our word is good as gold.” The Golden Company has no loyalty to anyone. The group is all about the money. Harry and the Golden Company are set to fight against Daenerys, Jon Snow, and the rest of Cersei’s enemies in King’s Landing.

Harry Strickland is played by German actor Marc Rissmann. Marc has also had roles on The Man In The High Castle and The Last Kingdom. Game of Thrones season 8 airs Sundays at 9 p.m. on HBO.