Halsey has always been open about her fertility struggles and in new Instagram Story, revealed that her pregnancy was planned.

“why is it ok to speculate and pass judgement about fertility and conception?” the 26-year-old singer wrote candidly to her fans. “My pregnancy was 100% planned, and I tried very hard for this bb.”

Halsey added, “But I would be just as happy even if it were another way.” 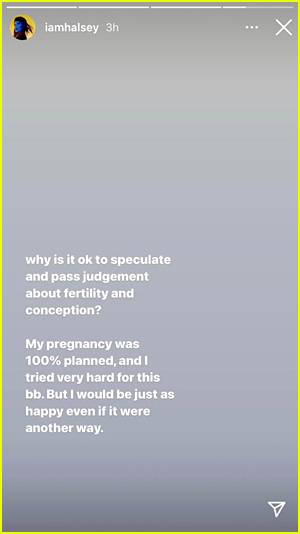 The “Without Me” musician announced the happy news that she was expecting her first child in January, and shared a sonogram of her baby shortly afterwards.

Halsey has been open up about her fertility struggles with fans for years and in recent months, shared that she suffered a miscarriage in 2015.

“It’s the angriest performance that I’ve ever done in my life,” she recalled after experiencing the miscarriage just before a show in Chicago. “That was the moment of my life where I thought to myself, ‘I don’t feel like a f–king human being anymore.’ This thing, this music, Halsey, whatever it is that I’m doing, took precedence and priority over every decision that I made regarding this entire situation from the moment I found out until the moment it went wrong. I walked offstage and went into the parking lot and just started throwing up.”

Halsey has also been real with her fans about her endometriosis battle as well.