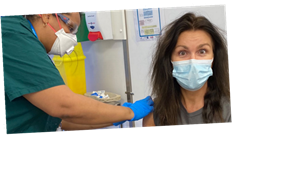 Susanna Reid has revealed to her followers that she's been given the AstraZeneca vaccination on Friday 19 March.

The broadcaster, who apologised for upsetting Patsy Palmer on Good Morning Britain, took to Twitter to share the news with her fans and shared a picture of herself getting the jab.

The 50 year old is seen proudly sitting on a chair, as a nurse pops the needle into her arm.

Susanna is wearing a protective face mask and shows a thumbs up to the camera with delight.

She wrote: "JABBED! Thanks to Kamilah who administered the AZ vax (& Graeme who booked me in)."

The mum-of-three also took the opportunity to thank the NHS staff and volunteers at the hospital for their hard work.

Susanna continued: "Thumbs up to all the hard-working staff & volunteers at St Thomas' Hospital vaccination centre (where Boris Johnson also got his today) on a record day for jabs."

Following her post, the presenter's fans and followers took to the comments section to share their happiness for the star.

One follower commented: "Congrats!! One step closer to freedom and hugs," alongside a black heart emoji.

A third added: "Well done susanna, I felt like I had a massive hangover a day after. Fingers crossed you'll be fine."

The outspoken star quit the show on 9 March after a dramatic walk-off following a heated row with Alex Beresford.

The following day, Susanna, who was targeted by trolls, was joined by co-host Ranvir Singh to host the programme and spoke about Piers' departure.

She said: "A number of people, will know the news and many of you will not and will be surprised that Piers Morgan is not here this morning.

"Now, Piers and I have disagreed on many things, and that dynamic was one of the things that viewers loved about the programme.

"He is without a doubt an outspoken, challenging, opinionated, disruptive broadcaster. He has many critics and many fans.

"You all know that I disagreed with him about Meghan's interview. He, himself, clarified his comments about her mental health on the show yesterday," Susanna continued.