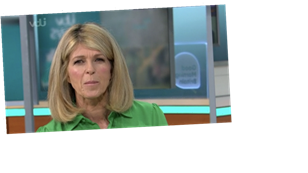 Kate Garraway has admitted she isn’t sleeping well as she appeared on Good Morning Britain the day after her tense clash with a guest.

GMB star Kate, 53, had a heated debate with Dominique Samuels over vaccine passports on Tuesday 16 February’s stint of the ITV news show.

During the heated debate Kate was accused of interrupting 22 year old political commentator Dominique. But, the blonde host insisted producers had given Dominique extra time on the show to ensure the debate was fully explored.

However, Dominique later branded Kate “rude” on Twitter. Kate was soon defended by Piers Morgan on the platform as he wrote: “I think Dominique should surrender her normal passport. It’s ‘ridiculous’ that she should be mandated to use one before she flies & a terrible attack on her freedom. Hand it back, Dominique and enjoy your freedom never to travel again.”

The next morning on Wednesday 17 February, Kate appeared alongside her co-host Ben Shephard,who recently shared a rare photo of his wife, and confessed she had trouble sleeping.

Ben, 46, began: “Good morning to all our viewers, there is a lot in the programme today!"

Kate, who later clashed with Dominic Raab on the ITV show, then replied: “There is a lot going on with my hair this morning as well, Ben.

“I did say to our team please could you put some extra sugar in my coffee this morning, I am going to need it.

“I haven't had a lot of sleep, the hair has exploded, it's going to be a fun morning for you, Ben.”

Kate’s husband Derek Draper is currently in hospital after he was admitted in March with coronavirus.

He has since fought the disease but remains in hospital as Covid-19 attacked his a number of parts of his body.

Kate took some time away from GMB earlier this month and, upon her return, revealed she hadn’t been able to see her husband Derek in h hospital since Christmas.

She said: “I haven't been able to see him since Christmas, we're back into situation of looking at strangers in masks.

“That's the situation for everybody at the moment. It's tough. When you're someone like him, dealing with a consciousness problem and trying to emerge, I can't help but fear it's not helpful.

“There's no end in sight to that. There's no one to blame or be angry with. It's tough,” she shared.

Kate also opened up on her decision to take time away from the show as she said: “I haven't been feeling very well.

“I think it's where chickens come home to roost over a long year. Took some holiday leave at home, had a lot of sleep and feel much better.”