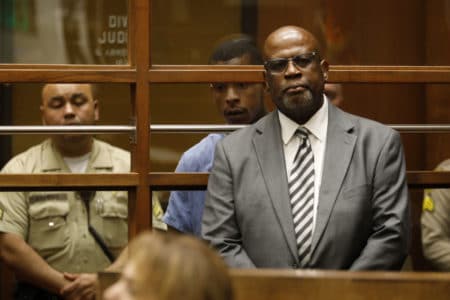 In a Facebook post announcing his withdrawal from representing alleged shooter Eric Holder, Darden alluded to death threats he and his family have received.

“I cannot understand why in 2019 some people would deny a black man his 6th Amendment right to counsel of his choice,” Darden wrote. “Or why defending such a man should invite threats not only against me but against my children too.”

You guys have been awfully good to me and my family. Thank you. I am on my way to appear for the last time in People v….

Darden, who runs his own law firm Darden & Associates, is most known for his role as co-prosecutor in the 1994-1995 trial of OJ Simpson. The infamous case was later turned into a series, American Crime Story: The People v.s. O.J. Simpson, with Sterling K. Brown portraying Darden.

Holder pleaded not guilty last month to the murder of Hussle, with Darden appearing alongside him.

Holder has been accused of gunning down late rapper and community activist in late March. LAPD Chief Michel Moore told reporters that Holder “walked up on multiple occasions and engaged in a conversation with Nipsey and the others that were there” on Sunday outside of a clothing store Hussle owned.

Holder then “left and subsequently came back armed with a handgun, and purposefully.”

An autopsy of the body of Hussle, born Ermias Asghedom, determined that he died of gunshot wounds to the head and torso. He was only 33.

Holder’s bail is set at $5 million.