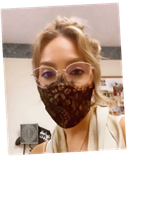 A few weeks ago, Farrah Abraham opened up about her ongoing struggle with mental illness.

Since then, the forrmer Teen Mom star has dressed up like a nun, wore a cross around her neck and, most recently, shared a video of her dog…. who is named Billionaire.

And who is seen in this footage licking its owner’s lingerie.

On Wednesday, Abraham uploaded a video to TikTok that depicted the canine running its tongue all overr Farrah’s underwear — which is lying in a giant pile on the ground.

“Stage 5 clinger alert,” Farrah captioned the video. “IDK [I don’t know] obsessed with my underwear and licks my face.”

Just a few days earlier, Farrah’s 12-year old daughter, Sophia, has confused her own followers by stating online that this same dog is gay and, yes, likes to lick lingerie around the house.

Upon viewing this latest video, many Reddit users had many questions.

“Why the hell would anyone keep their underwear and lingerie in a heap on the floor?” asked one user.

“That little dog was probably chewing the crotches out of the underwear and then licking her face. She is a gross.”

“Lmfao omg girl noooooo. Why post this for the world to see Farrah,” remarked a third person, while a fourth wondered: “What the f-ck did I just watch?”

These are all sensible inquiries.

But might some larger concerns also be at play here.

As noted above, Farrah has battled Depression for years. She’s had suicidal thoughts in the past.

Yes, the ex-reality star is easy to mock — but could she be suffering through a mental breakdown here?

“I just wanted to say, over the years, I’ve shared so much of my life when I have been deeply depressed, suicidal, probably mentally ill because of it,” the mother of one said last month.

“And there’s so much that I’ve learned about myself through my teens to my 20s.”

“I think, as there’s millions of people who go through suicidal thoughts, depression, it’s really hard. It’s something that you sometimes need support for.”

We rarely can find a reason to praise Farrah, but she did an admirable job in this post of setting an example for others who can relate to her struggles.

“It’s beautiful to take care of your mental health,” she added.

“It’s beautiful to understand that emotions are healthy.”

Abraham, for once, is right here.

We hope young men and women around the country is a similar situation do not hesitate to get help.

But we also hope they pick up their dirty laundry and keep it away from their pets.

Because, come on now, that reallly is pretty gross.