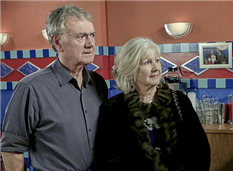 Fair City had been beaming into the nation’s sitting rooms for nine years when Una Crawford-O’Brien joined the cast as Renee Phelan.

Being a part of a soap that pushed the boundaries was exciting for the Clondalkin woman who now lives in Rathgar.

“We have over 500,000 people tuning in a night. That is huge. We bring up all subjects — we had the first gay kiss in a soap. We have introduced so many things, and others have followed suit,” she said.

“It is controversial at times but there is a lightness to it too, some soaps can have the fighting and arguing going on all the time. Fair City has a good mix, you have the fun and madness, and I think that appeals to people.” She still fondly remembers her first day on set.

“It was November, 21 years ago. I remember just thinking it was great to be a part of something like this, it was running nine years at that stage so it was very exciting for me,” she said. “My first scene was with Joan O’Hara and Tom Hopkins and it was just so exciting to perform with Joan.”

However, it is meeting her partner Bryan Murray that springs to mind when she is asked to choose a stand-out moment.

“I didn’t know at the time what was to come, or that we would be a couple,” she said. “It would have to be a highlight. I’ve had some great storylines too — I’m really lucky to be honest.”

“We have brilliant writers and directors. When you get good words, it is an easy job. The hours are hard, getting up at 6am and maybe not getting home till 10pm but when you are doing something you love it isn’t a job.” Having someone at home who understands the acting world and demands of a TV soap like Fair City is always helpful too. Sometimes Una and Bryan run through their scripts together, so often cast in the same scenes as married couple Renee and Bob.

“If you’re working closely with someone usually you can come home and say so-and-so was driving me mad — but we can’t do that,” said Una, laughing. “We have great times and we love working together — and we don’t want it to be mushy or lovey-dovey all the time. I love when we are at loggerheads.

“Sometimes we rehearse at home, sometimes we don’t. With difficult different scenes we discuss it beforehand and get into the nitty-gritty. He understands exactly what I am talking about. We are on the same wave-length.”

Like most of Carrigstown’s residents, Renee has had her ups and downs. Her relationship with her daughter Heather, played by Una Kavanagh, has been particularly special.

“It was lovely time when Una came into it. This was a daughter I had given up aged 16 — and it was just one of those moments. I can still see myself in the pink suit I was wearing that day,” she said.

Heather then acquired a brain injury, which was so well written that, according to Una Crawford-O’Brien, it felt real.

“You are the part you are playing, at least that is how it is for me. It was easy because it felt real. Una [Kavanagh] was so professional and it was such a serious subject, we hoped that we had handled it well,” she explained.

“There are people who have gone through this and we wouldn’t want to offend anybody.”

When the cameras stop rolling, herself and Una are firm friends.

“I’ve some great friends from Fair City. I wasn’t in it for a while a few years ago and you miss being part of it. We’re so close. When we had the loss of Karl and Tom this year, it was all so personal. They were part of our family. You got to know them so well, exploring storylines with them,” said Una.

“We have had such happy times too — two of the girls got married this year, Sorcha Furlong, who plays Orla, and Jenny Lee Dixon, and we went to their weddings. And this year Caroline who plays my other daughter Farah is down the country so we went and visited her for the weekend. Una is another great pal of mine. I’m not just being sentimental, it has been genuinely brilliant.”

Renee is a passionate character and there are times when she has clashed with family members on-screen.

She used to run Phelan’s shop with husband Christy but when she had an affair with Bob, things got a little bit “contentious”.

“Myself and Christy took it over, but then I went off with Bob so when Christy died he left me with nothing. So it’s a bone of contention now, as I am working for Farah. She has gone to do a photography course and has brought in a manager so I am lower down the pecking order again,” said Una.

“Renee is feisty and there is a feisty streak in me too when I want something,” she added. “When Heather wasn’t well, we saw that in Renee too, she’d do anything for her daughter — I don’t know if I got it from Renee, or if she got it from me.”

Either way, Renee is someone that the public are fond of.

Getting recognised as her is commonplace, said Una, recalling one particularly funny incident with a fan of the show.

“Christy and I had just taken over the shop in the show and I had gone into buy some material for a patchwork I was making. And the woman at the till said, ‘But how will you have time? You’ll be in the shop all the time’,” she said.

“They know it isn’t real but they treat it like it is.”

As the soap marks its 30th anniversary, Una has no plans to move on from Carrigstown.

“We celebrated Christmas in the new lot, it was lovely,” she said.

“Hopefully, in another 30 years’ time, we will still be up and running and celebrating loads more years.”