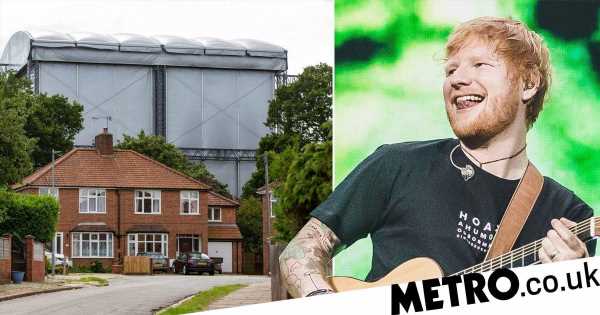 People living near to Chantry Park in Ipswich are pretty much getting a free Ed Sheeran concert in their own backyard, as new photos reveal how close this weekend’s venue is to neighbouring houses.

The stage has been erected ahead of Ed’s shows this weekend in his hometown of Ipswich, Suffolk and new aerial shots have revealed that there is little more than a row of trees between the venue and local residents.

Around 160,000 people are expected to attend across four days over the bank holiday weekend (from 23-26 August) as Ed wraps up his mammoth Divide World Tour with his homecoming concerts.

If the local residents are Ed Sheeran fans, they’ll likely get to hear his dulcet tones in the flesh from their own back gardens without paying the £82.50 entry fee… even if they probably won’t catch a glimpse of him from the trees.

However, if they’re not into the Sing star’s music, it’s going to be a pretty long Bank Holiday weekend for anyone living by Chantry Park – if you’ve ever been to a festival or an open-air gig, you’ll know they come with some pretty hefty sound systems…

It was recently reported that Ed, 28, bought out some of the neighbours around his Suffolk Farmhouse after they complained about the building works at his property, dubbed Sheeranville.

Here’s hoping he doesn’t get any noise complaints from the neighbours this weekend, because he doesn’t need to add three more streets to his portfolio… though affording them shouldn’t be too much of an issue.

By the time this weekend is over (and Ed hopefully has some time to take a well-deserved holiday for a week or two) he will have been on the road for 893 days, compared to U2’s 760 days on the road.

Ed will have performed 255 dates on this tour, playing to on average over 34,000 people per night, so it’s only right he will finish his tour off where it all began for him, in Suffolk.