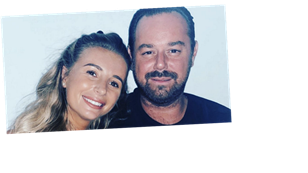 The EastEnders star, who recently relived the moment his father-in-law "dropped down dead" last Christmas Eve, made the revelation during his new joint-podcast Sorted With The Dyers with his 24 year old girl.

Former Love Islander Dani seemed to take the joke in her stride after her dad gave away his hilarious nickname, which is often used to describe anti-social lower-class youth who dress in sportswear.

Later, the pair discussed her looming due date as Dani asked him if he would be there to support her through labour as she gives birth to her first child with stockbroker boyfriend Sammy Kimmence, 24.

The actor, 43, replied: "As long as it's nice and quick for you, it doesn't matter if I'm in the waiting room or indoors with my feet up eating some crisps."

Although Dani is planning to keep things secret until the birth of the baby, after recently revealing the little one's stunning nursery on social media, eagle eyed fans speculated about her having a little boy.

Alongside an Instagram upload of gorgeous photographs showing off her unborn child’s new nursery, Dani penned: “I’m so excited to finally reveal our gorgeous new nursery. I'm in love!”

“Thank you so much @wayfairuk for bringing my vision to life,” she continued. “I feel so organised but there is just one small detail missing… hurry up little one!”

One of Dani’s followers speculated on the gender of Dani's first child and commented saying: “Very boyish I bet your having a boy x”. [sic]

“I thought it was slightly masculine so thought she knew it was a boy,” another of Dani’s fans replied. “Either way a stunning nursery.”

Looking inside the baby’s white cupboard and referring to the adorable clothes, one user pointed out to another: “I see blue sleeve look.” [sic]

While another follower seemed confident in claiming that it was “definitely” a bedroom for a “baby boy”.

Despite insisting that she doesn’t know what gender she’s carrying, this isn’t the first time people have been certain about the reality TV star having a baby boy.

After recently sharing a picture of her ultrasound on social media fans were convinced that they could tell the gender.

"Honestly dani I see your dads face,” [sic] another agreed. “I think it's a lil boy too."