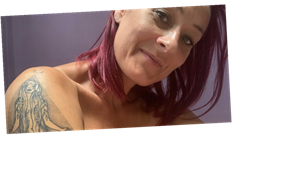 EastEnders star Luisa Bradshaw White has stunned fans by showing off a previously hidden tattoo in a topless photo on her Instagram page.

The 45 year old actress, who plays Tina Carter on the BBC soap, showed off the stunning inking to her 55,400 followers as she shared the snap.

Luisa’s photo shows the actress with dark pink hair looking stunning as she smiles at the camera.

The Tina Carter actress has minimal makeup on, showing off her natural beauty, as she looks into the camera lens.

She is showing off the top of her arm, which has a previously-unseen tattoo on, in the snap.

The etching is of a naked woman sitting with her legs crossed and her hands resting on her knees as if she is meditating.

The woman’s long hair, which covers her nipples, has a number of flowers dotted around while leaves cover her arms and legs as she peacefully sits in the middle of a shaded-in triangle.

Meanwhile a crescent moon sits above the meditating woman’s head as she closes her eyes.

As Luisa, who married her longterm partner Annette Yeo in 2015, posted the photo on her Instagram she captioned it with a simple pink heart emoji.

The soap star’s post received more than 3,000 likes from fans and comments from fellow EastEnders stars and fans to compliment Luisa on her ink.

Lacey Turner, who also has some hidden tats, commented with a simple heart-eye emoji.

And Milly Zero, who plays Dot Cotton’s granddaughter Dotty on the soap, added: “Beautiful” followed by a blue heart emoji.

Meanwhile one fan asked: “Awesome tat! Just curious, do you need permission from the show before getting one?”

As a third fan wrote: “It looks great!”

In other snaps the actress showed off a number of other inkings, including a lotus flower on her back, which she flaunted in a snap where Luisa wore a vest top and had her back turned the camera.

Luisa has her hands on her hips and is standing in a grassy field as she smiled at the lens.

The star later revealed she has a leaf design etched on the inside of her elbow as she posted a selfie and shared a wise quote on Instagram.

As she smiled at the camera, Luisa wrote in the caption: “Read this today…. liked it a lot!!

When you allow life to happen through you instead of imagining it is happening to you…you’re FREE!!”