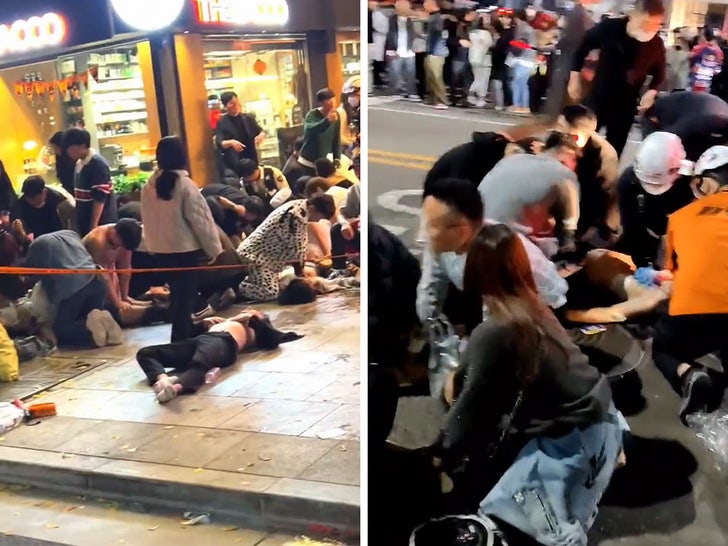 Multiple people are feared dead after dozens of lifeless bodies required CPR in South Korea Saturday during what appears to be a mass gathering that turned into a crowd surge.

Several videos and photos are circulating on social media right now showing countless people laid out on the floor in the streets of Itaewon — a popular neighborhood in Seoul — and receiving chest compressions from both first-responders and bystanders alike.

The images are scary … as a lot of these folks don’t seem to have any signs of consciousness — and you can tell how frantic of a scene it is by the reaction.

Reports on the ground say upwards of 100 people were injured total — with a significant amount purportedly having gone into cardiac arrest as well. There are signs multiple fatalities could result from this — ome photos show cops putting tarps over what seem to be dead bodies … but there’s no official count of lives beyond beyond just 2, per NYT.

The reason all these people congregated here is because it’s one of the biggest Halloween get-togethers there in Seoul — reports say tens of thousands of people had packed into the relatively tight alleyways, which some speculate likely triggered a stampede of some sort.

One rumor floating around — which hasn’t been substantiated — is that the crowd crush was caused by folks rushing toward a bar there in Itaewon after word of a celeb sighting … although it’s unclear who exactly it might’ve been, if anyone.

S. Korean President Yoon Suk Yeol has dispatched emergency services to Seoul, and the mayor is on his way back from an international trip to survey the damage and get briefed.