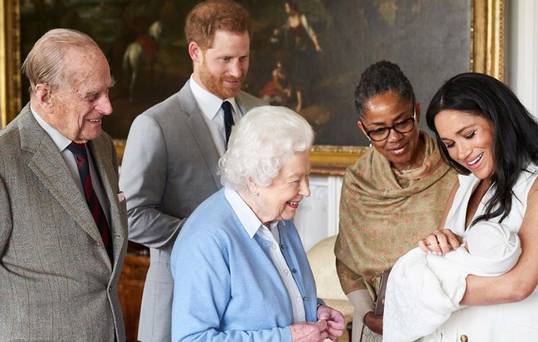 Meghan Markle’s mother Doria Ragland has been an essential part of royal watch culture for more than a year now.

As her daughter, now Britain’s Duchess of Sussex, wed Prince Harry last May in Windsor Castle, she arrived solo and carried herself with a sense of confidence and grace which was universally praised.

While the groom’s family sat opposite her, filled with support from a neverending parade of siblings, cousins and aunts and uncles, she held her head high and observed lovingly as her daughter exchanged vows in one of the most talked about weddings in modern history.

Prior to that moment, pictures of Doria were a valuable commodity. Meghan shared a few on her now-defunct Instagram page and there were the occasional paparazzi shots in which she would join her daughter when they were pictured en route to a yoga class during the early days of her romance with Harry. But she made her first ‘official’ appearance the same time her daughter did – at the Invictus Games in Toronto in 2017 – as she dutifully joined the couple when the world’s media first turned its gaze onto them.

Earlier in the day, Meghan and Harry made their first appearance together and later, Doria joined them from the relative safety of public scrutiny in a private box for the closing ceremony.

It’s clear that for the big moments, Meghan always wants her mother by her side. And she has been given pride of place in the Sussexes new life as parents to baby Archie. She was “overjoyed” at the arrival of a baby boy on Monday, as per the Buckingham Palace official announcement, and featured in pictures released yesterday alongside Queen Elizabeth and Prince Philip.

It was also the first time in history that a British monarch was pictured alongside a royal baby’s African-American grandmother.

By comparison, the Middletons only featured in portraits alongside the queen at Kate and William’s 2011 wedding and later for christening images of Prince George and Princess Charlotte.

It’s not only reflective of a strong mother-daughter bond, but it’s imperative that Meghan has equal representation on her side of the family instead of being swallowed whole entirely by the British royals.

Since her father Thomas Markle ousted himself from her inner circle by staging paparazzi shots before her wedding in exchange for payment, deciding not to attend her wedding two days before where he was due to walk her up the aisle and consistently selling stories about her in the press, Doria is her saving grace.

In February, when Thomas shared private letters his daughter wrote him pleading with him to stop pandering to the tabloids and focus on rebuilding his relationship with her instead. His decision to publish them in the Daily Mail was the final nail in the coffin. For years, she spoke fondly of him, but the temptations of international fame eventually proved too difficult to resist – even at the cost of a lasting relationship with his youngest child. He rightfully did not receive credit in any official announcements made by the palace and although he released a gracious statement after his grandson’s birth, he has essentially been washed from this moment in history and it’s questionable whether or not he will ever meet Archie. Harry still hasn’t met him in person.

Doria, from whom he divorced in 1988, understands the value of privacy and discretion. She has never said a word publicly about her daughter, only through official channels as expected. Sources have said she would never do anything to jeopardise her relationship with Meghan and seeks her blessing for anything that might result in headlines – such as a yoga session with Oprah last year.

When it came to the wedding, Doria’s name was considered as the potential replacement to walk her up the aisle after Thomas Sr backed out, but in the end they agreed it was too much pressure to put on her at the last minute.

And similar to Harry’s mother Princess Diana’s inclusion of her sons in how fortunate they are, Doria would often educate Meghan on those less fortunate she was.

At the age of 10, she took her to visit disadvantaged children in Rwanda, slums in Jamaica and poverty in Mexico. “My mother raised me to be a global citizen, with eyes open to sometimes harsh realities,” Meghan wrote previously on The Tig.

It’s of little surprise then that Meghan has carried these characteristics into her adulthood, which would eventually prove to be the catalyst for the spark that brought her and her husband together.

Her sense of altruism also applied to her work. She has a BA in Psychology and received a Master’s degree in social work from the University of Southern California in 2011. She spent most of her recent working years at the Didi Hirsch mental health clinic in Culver City, California. She is the very definition of a free spirit: the 62-year-old is a yoga instructor (she first introduced her daughter to the yogi lifestyle with mommy-and-me classes when the duchess was seven) who enjoys her quiet life in Los Angeles, in between jet-setting to the UK with unfettered palace access.

For years, Meghan has proclaimed her unwavering affection and admiration for her mother, both in interviews and on her former blog The Tig, each description more charming than the last.

“She will swivel her hips into the sweetest little dance you’ve ever seen, swaying her head and snapping her fingers to the beat like she’s been dancing since the womb. And you will smile. You won’t be able to help it. You will look at her and you will feel joy.

In the same Mother’s Day essay, she wrote of her mother’s kindness when dealing with her grandmothers, or, more specifically, “She was showing me how to be a daughter, not just in that moment, but for when I became that grown woman.”

It would seem the lessons in life have been successfully learned and Meghan is rewarding Doria with a return in the love and affection she showered on so many others.

While Meghan’s circle tightened after she became a future duchess, her mother remained a constant: she helped plan the wedding and flew out last month to help with last minute preparations ahead of the birth of baby Archie. She even has her own room for long stays at Frogmore Cottage.

Kate Middleton’s mother Carole famously moved in with her and Prince William in the weeks following Prince George’s birth in 2013, but there is a noted difference between both in-laws – geography.

All the Middletons are all based in the UK and Kate has access to and endless support network in the form of her parents and siblings; while Meghan is essentially afloat in a foreign country (of which she is now a duchess) and has strained relations with most of her troublesome family.

These visits and moments alongside her mother are important, not only for her at a very human level, but also a means to silence Meghan’s critics, who choose to focus on her lack of correspondence with some family members; who frankly no one would blame any other person for cutting off.

Her half-sister Samantha is writing a book about “princess pushy” and regularly goes on rage-filled rants about her on social media referring to her as “duchASS”, her half-brother Thomas Jr was arrested twice in the last two years – once for holding a gun to his girlfriend’s head in 2017 and in January of this year for driving under the influence. Her nephew Tyler Dooley, who recently appeared on a royal-adjacent MTV reality show. He was involved in a fight with 20 others outside a bar in Oregon one day before Archie’s birth.

The headlines around her family are rarely positive, except for the coverage around her saving grace Doria, who holds herself with equally regal manner as any of the royals who were literally taught how to carry themselves from birth. On social media and in royal-themed Facebook groups and Reddit threads, Doria is a universal peace bringer to the in-fighting around royal politics and personal preferences.

She might not be an official member of the British royal family, but she remains an exciting addition to the narrative around her daughter’s rise to fame – and her new role as grandmother to little Master Archie Harrison Mountbatten-Windsor.