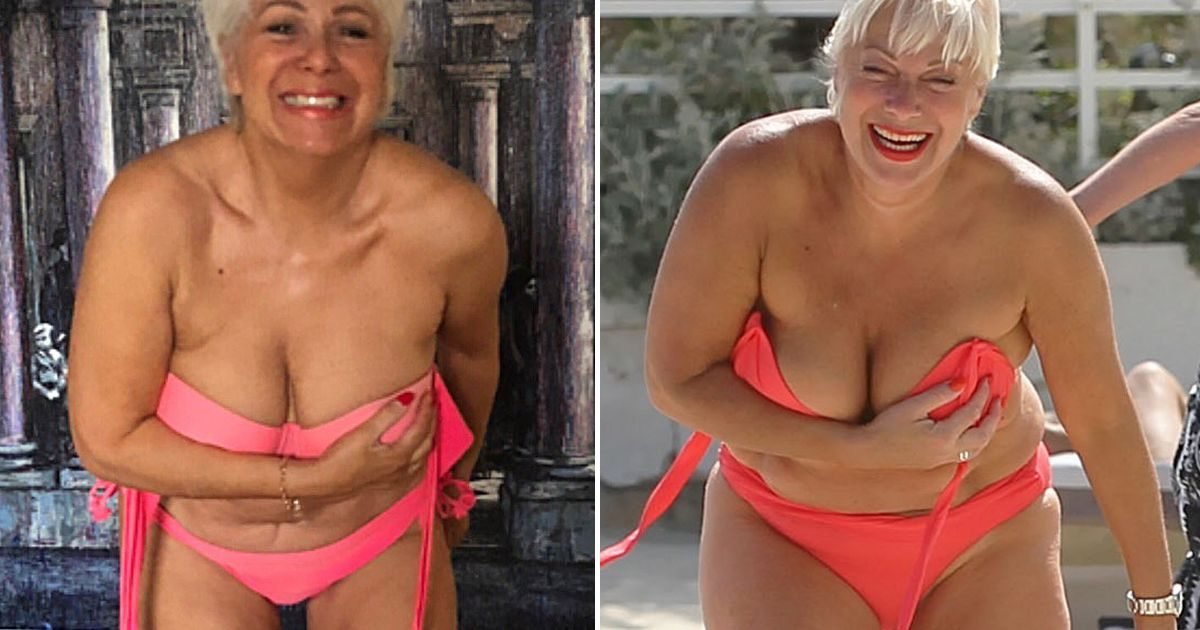 Denise Welch regularly has fans gushing over her bikini body as she shares 'iconic' sexy pictures and videos with fans.

The Loose Women panelist has hit the headlines countless times over the years for her racy snaps, which always ooze body confidence.

However, six years ago it was a very different story, as her weight ballooned while she battled depression and addiction.

Denise and now-husband Lincoln Townley used to drink every night, and got to the point where a "hangover felt normal".

In a bid to adopt a healthier lifestyle after Lincoln had a heart scare in 2013, they cut out the drink.

But it wasn't long before she developed a "destructive" food addiction in its place.

She reflected: "I had periods where I was much slimmer but all of the periods in life, in the last 20 years when I was slim without trying, it was the bad time in life.

"I had problems with alcohol and it was when I took alcohol out of my life that I started to replace alcohol with food. I wasn't aware I was doing it at the time, it was a slow burn."

Speaking to Broccoli and Brains magazine, Denise recalled that she used to crave sugary food as a replacement for booze.

"Until I gave up drinking, I never really had a weight problem. I’d certainly never had a sweet tooth,” she said.

"But once I stopped drinking, I started getting massive sugar cravings and the weight started going on."

As Denise piled on the pounds while battling her alcoholism, she is the first to admit that some less than flattering paparazzi pictures were taken of her.

But it was ahead of her wedding to Lincoln that she finally decided to take action.

Joining LighterLife diet plan as their Celebrity Ambassador, she lost almost two and a half stone in just 9 weeks – and the confident star has never looked back.

The plan consists of daily foodpacks, shakes and snacks, and the tools to help her manage her stresses.

Unlike other diets, this plan also includes cognitive behavioural therapy, or CBT, which helped her to get to the bottom of why she was experiencing sugar cravings.

"I initially found myself reluctant to go to the group,” she said. “While in my job I am generally a bit of a show-off, I am quite shy in that private sort of situation.”

However, Denise soon learnt to love the classes, and connected with "fabulous men and women" in the same position as her.

She then went on to do the LighterLife 5:2 fasting diet, which she has maintained to this day.

Both food replacement diets and the 5:2 diet have divided nutritionists, and don't work for everyone – especially if used irratically.

But they certainly seem to be doing the trick for Denise…

Proudly sharing a now viral picture of her least favourite paparazzi shot from the days of her "food addiction," juxtaposed against a significantly slimmer shot in the same pose taken five years later, Denise cemented herself as a fitness and body positivity "icon".

Now a size 12, Denise doesn't pretend to be flawless, but she promises to flaunt her bikini body well into her 90s if it will boost other women's self esteem.

And she does so regularly, dazzling fans with hilarious skits of herself strutting along poolsides and dancing to her son Matty Healy's singing in The 1975 while wearing nothing but a skimpy two piece.

"I'm doing it because there are a lot of women in this country who have self esteem issues, and a lot of it is to do with women's magazines putting lots of pressure on women for how they look, so I'm putting my money where my mouth is and saying that no one can tell me not to wear a bikini".

She inspirationally added: “I’ve got bumps and lumps and a tummy and I’ve had two children. But I don’t look bad for an old bird.