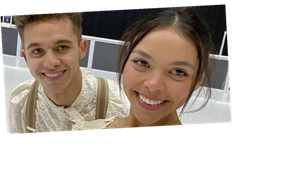 Dancing on Ice could bring back Joe-Warren Plant and Vanessa Bauer after they were forced to quit the show last week.

Emmerdale actor Joe, 18, and professional skater Vanessa, 24, were left “heartbroken” after they were forced to leave the competition as they tested positive for Covid-19.

But, in another twist, it has been reported that if the stars test negative with enough training time for next Sunday’s show they can return to the competition.

The apparent decision would go against the show’s own rules, which states that a positive coronavirus test meant immediate and permanent expulsion from the competition.

It’s understood bosses will not be inviting any of the other stars to return after Rufus Hound, Billie Shepherd and Denise Van Outen were forced to leave the show due to injuries or a positive Covid-19 test.

The other stars all left the competition after two weeks of being away from the show, while Vanessa and Joe-Warren, who previously said Faye Brookes is “one to watch”, have missed one week since their exit.

A source told The Sun Online: “It does feel like one rule for them and another for everybody else.

“It feels like nothing is going to get in the way of Joe and Vanessa winning this year’s show. They might as well get the trophy now.

“Two weeks ago they changed the rules to say that a positive test meant you were out for good. That’s why Rufus was given the boot and told he could not return. Now apparently it doesn’t.”

It comes after bosses were forced to cancel the live show on Sunday 21 February and will air a highlights special, entitled Dancing on Ice: The Greatest Show on Ice, instead.

The pause in production was sparked after one remaining celebrity from the show, Jason Donovan, suffered an injury.

The series will resume the following weekend, after everyone has had a chance to recover from their injuries.

A spokesperson told OK! 0nline: “ITV have taken the decision to pause Dancing on Ice this week and there will be no live show on Sunday 21st February.

“Each week our production team and cast have delivered a fantastic show during incredibly challenging times.

“The welfare of all of those involved is important to us and we felt it prudent to take a week’s break at this juncture.”

They added: “Continuing to make the best TV for our viewers is of paramount importance to us and we look forward to resuming the competition next week, with the show back live on Sunday 28th February.”