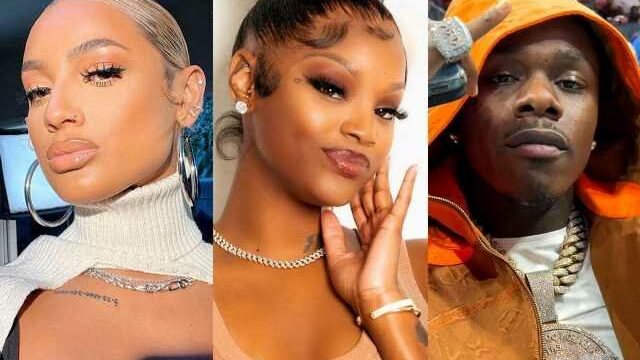 Amid her ongoing drama with the rapper, the ‘Yellow Bone’ singer is also exchanging shades online with his other baby mama MeMe, who seemingly showed no sympathy for Dani.

AceShowbiz –DaBaby and DaniLeigh‘s ongoing drama is not the only thing that the latter has to deal with. The “Yellow Bone” singer is also feuding online with the rapper’s other baby mama MeMe, who seemingly showed no sympathy for Dani.

After DaBaby and Dani had made headlines after getting into an argument on Instagram Live, MeMe appeared to shade Dani in an Instagram Story as she shared a snippet of Yung Miami‘s “Rap Freaks”. The two also exchanged shades at each other in Instagram comments.

Calling MeMe “lame a** b***h”, Dani claimed MeMe refused to “even met me in person but always wanna talk on the internet ! You know where I’m at love !!!” MeMe, meanwhile, accused Dani of “playing victim.”

Dani further took to her Instagram account to clap back at MeMe, writing, “Why every time I’m viral this girl wanna post about me???!!! U know where tf I am!!! I have reached out to u to be cordial plenty of times!!!” Dani also insisted that she didn’t steal DaBaby from MeMe because “he wasn’t yours.”

Later, MeMe went on Instagram Live to weigh in on the whole event involving the “ROCKSTAR” rapper and the singer. “All that I’m a bully, or I’m laughing at another woman’s pain, man, I don’t give a f**k what y’all talking about,” the mother of DaBaby’s eldest daughter said.

“I ain’t laughing at the situation, I’m laughing at you,” she indirectly told Dani. “Because, baby, it ain’t fun when the rabbit got the gun. It’s crazy how the motherf**ker was turned, and that’s the moral of the story. It’s backwards for you to ever have a problem with any female he’s involved with, dealing with, you don’t have that right, you get what I’m saying?”

She went on to add, “you knew what you was walking into when you walked into it,” before saying that “spiritual warfare is real. The shoe is on the other foot, and karma’s a b***h.”