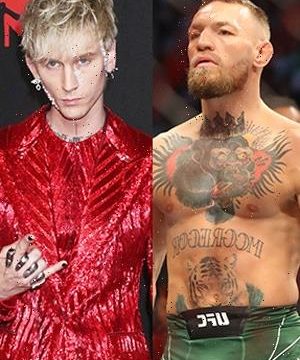 Beef? What beef? After Conor McGregor and Machine Gun Kelly got into a scuffle at the MTV VMAs, the MMA icon said ‘all’s good’ and the rocker is ‘more than welcomed’ to watch his next fight.

If anyone was expecting Machine Gun Kelly to pull a Jake Paul and get into the ring to settle his score with Conor McGregor, don’t hold your breath. Two days after Conor, 33, and MGK, 31, got into an altercation at the 2021 MTV Video Music Awards, the MMA fighter told Adam Glyn, a comedian and NYC-based street journalist behind Adam’s Apple, that there’s no beef to be squashed. “I’ll tell you what happened, man,” said Conor. “I’ll tell ya what it is. I’m free here in New York City. I’m back in New York.”

“I got to go to the Barclays Center again,” added McGregor. “I got to present an award. That’s just it. I was just going to have a good time — you know what I mean? That’s it. All love, all love. It’s all good.” Conor than said that MGK could “Come to the next fight” and watch him take on his next competitor. “Everyone’s more than welcome to come to my fights or come to the shows.” When asked if there was really “no beef” between them, a shocked Conor said, “I don’t even know the guy! I don’t him. Who is he? Telling me he’s been at the fights? Megan [Fox has] been at the fights for years. So, I know Megan. I don’t know the guy.” Conor stressed that there was “no problem,” and repeated his invite for MGK to “come to the fights.” 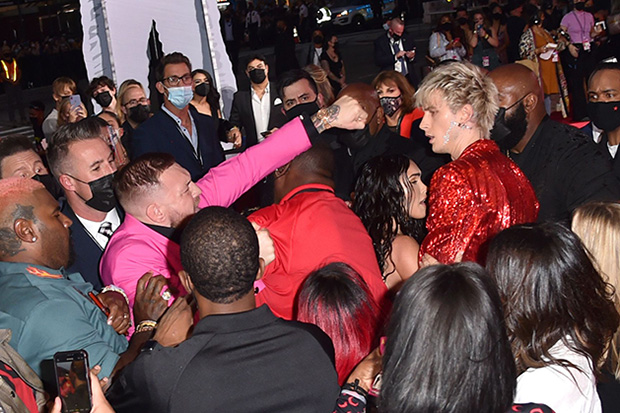 Conor and MGK (born Colson Baker) nearly came to blows before the MTV VMAs began. It’s unclear what exactly caused the fight, but multiple outlets have reported that Cono asked to take a photo with MGK, which the “Papercuts” singer turned down by the star’s team. There were reports that things got a bit heated, which “escalated into [MGK] pushing Conor,” and that resulted in McGregor stumbling back and spilling his drink. Conor allegedly chucked the remainder of his drink at MGK and Megan. In photos of the incident, Conor has his arm outstretched, as if he was taking a swing at Kelly (with Megan sandwiched between her boyfriend and the security guard restraining McGregor.) 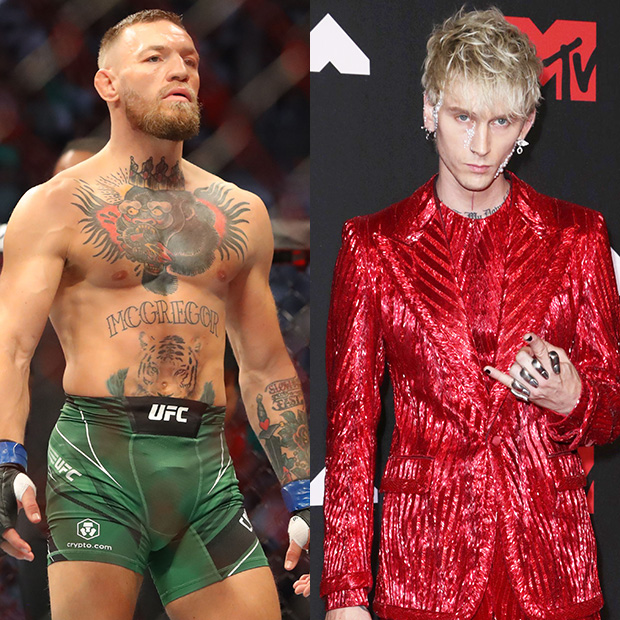 Afterward, Conor spoke with Entertainment Tonight about the incident, and denied that there was anything to it. “I just showed up,” he said.” I don’t even know the guy, to be honest with you. Nothing happened with me. I only fight real fighters —people that actually fight, you know what I mean? I certainly don’t fight little vanilla boy rappers. I don’t even know the guy.  I don’t know anything about him, except that he’s with Megan Fox.”